I was so on top of Halloween this year. I knew that I was going to have more than usual on my plate this month (I promise to write about Pecha Kucha soon, because it was amazing), so I got an early start and finished a couple of weeks early. The weather forecast for Halloween isn’t looking good but today was gorgeous, so I told the kids that I wanted to take costume photos today just in case it’s pouring on Thursday.

This is the first year I’ve fully purchased a costume. Jude wanted to be Miles Morales (the newest Spiderman from the movie Into The Spiderverse). As much as I hate to break with tradition I can’t improve on (or even approach) a Spiderman suit from Amazon. That said, I wasn’t willing to just buy the spandex suit and call it a day. I wanted him to truly look like Miles Morales, so I got him a red hoodie and a navy bomber jacket so that he could copy the look from a favorite scene in the movie. Then a colleague asked me if we were going to get him Jordans and I said no…but then couldn’t let go of the suggestion. The actual Spiderman Jordans are ridiculously expensive, so we let Jude choose something in the $50 range, just because it was fun to complete the look. 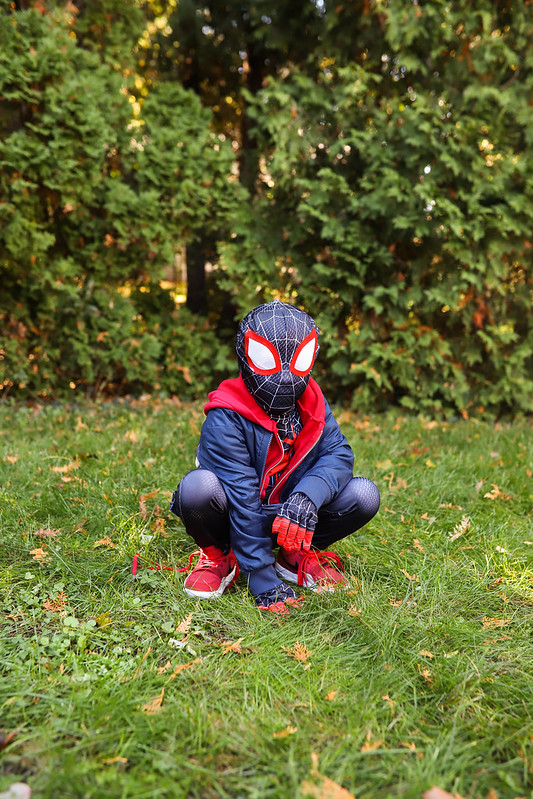 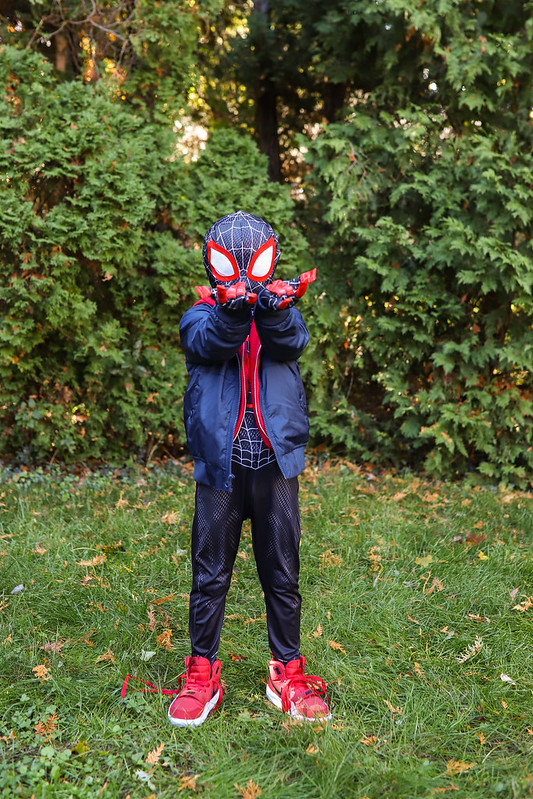 I was under strict instructions from Jonah to leave one untied, because Miles wears his that way (and it comes up on more than one occasion in the movie). 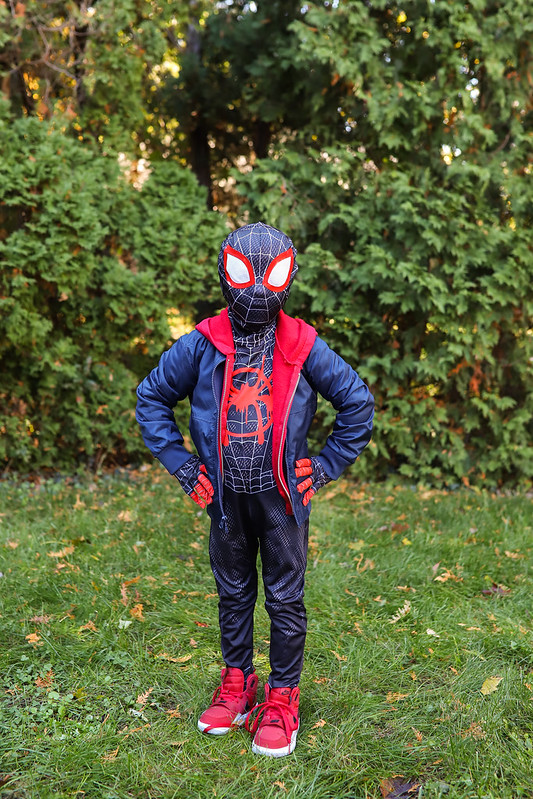 He seems to love his costume (not that you can tell from his expression), and I love that the extra layers make it both more authentic and warmer. I’m surprised by how much I love it, considering I didn’t make any of it. Maybe it’s because it’s so very Jude right now. When I see him in it I can’t help but smile.

Vivienne came up with her own original character this year: “a rainbow, rock-and-roll ballet fairy.” It felt relatively easy because there was technically no way to get it wrong (well, unless you count V’s very strong opinions). I decided to make her an original rainbow tutu rather than buy one (harder for sure, but more fun) so we went to the fabric store and she picked out roughly twelve different colors of tulle along with a ribbon for the waistband. I only realized after taking the photos that you can only see about four of the colors (the rest are in back) but whatever. I picked out a shiny rainbow leotard and she chose a rainbow wig (we had to give it a bang trim because she couldn’t see), I bought a cheap fake microphone and tied rainbow ribbons to it a la Steven Tyler (she’s never heard of him, but whatever – it completed the “rock and roll” in my mind). She already owned fairy wings and a jean jacket. 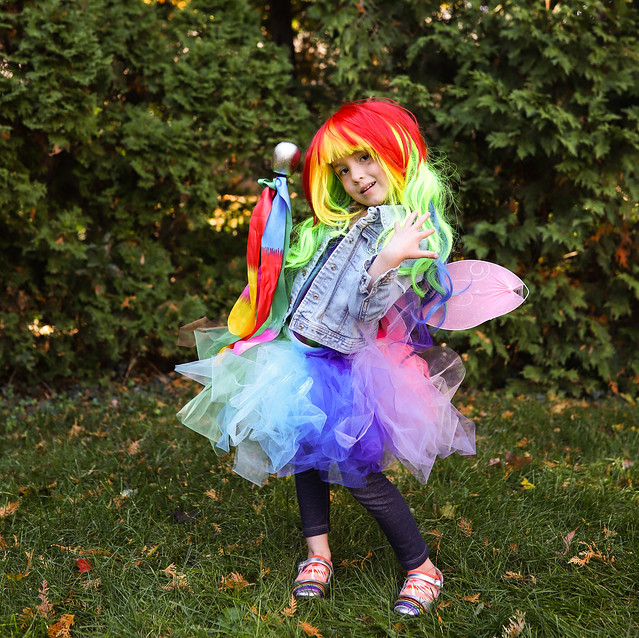 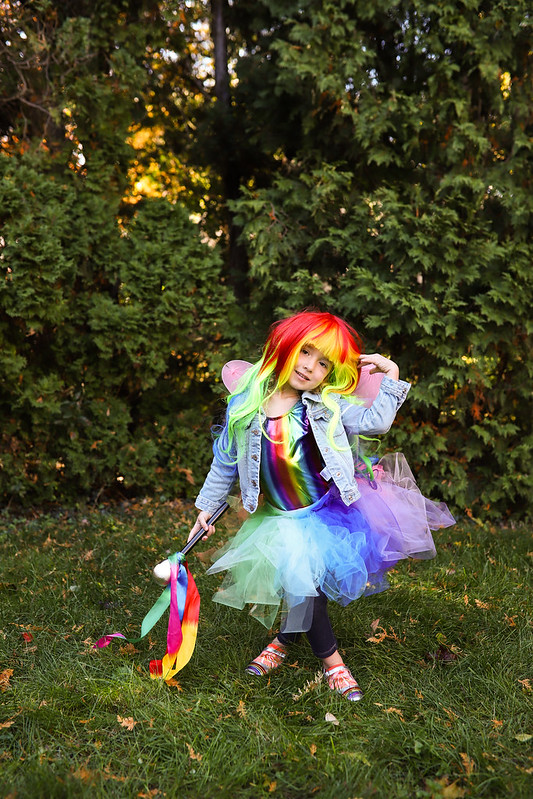 Jonah’s costume was by far the biggest challenge, but probably also the most fun and interesting as a result. He first mentioned that he wanted to be the Whomping Willow from Harry Potter back in the spring, I think? I doubted the idea would last till Halloween but was thrilled when it did. That is until I started looking up costume ideas on Pinterest and basically came up empty. This doesn’t seem to be a costume that many people are attempting (either that or they’re keeping their design secrets off of Pinterest). I didn’t even get many hits on a search for “tree costume.” So we more or less had to figure this out on our own. I knew that I wanted more than just arms for branches but couldn’t figure out how to make that happen. I consulted quite a few friends and it may have been my aunt who eventually suggested pool noodles.

I found some really fun crushed velvet that looked a lot like bark and made him a long sleeved gown as his trunk. I had extra velvet so I decided to make a hood, and then sewed two long sleeves for the pool noodles. I attached the sleeves to the rest of the gown (the trunk) in three places, with one noodle wrapping his front and the other his back, both going up above his shoulders. I googled, “how to make a tree out of wire” and used the instructions to make branches out of brown pipe cleaners, and ordered some cheap plastic willow branches because I wasn’t sure that it would be clear he was a tree unless he had some greenery (not totally authentic to the Whomping Willow, but whatever). I didn’t realize until the last minute that once I put the pipe cleaner branches into the ends of the pool noodles they would fall over, so my parents came over (they’re always involved in Halloween prep somehow!) and helped me think through solutions. I ended up having to wire the two branches together and put wooden dowels inside them to keep them from flopping over too much. I think Jonah may have snapped one of the dowels while trying to whomp his brother, which is why one of them is flopping backwards in the photos. 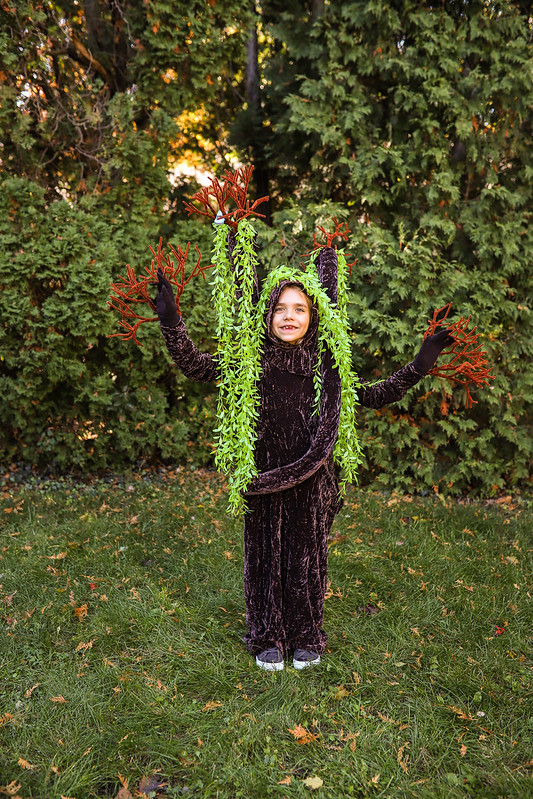 The finishing touch, of course, was the flying Ford Anglia from the movie. I was able to find one on ebay for around five bucks. 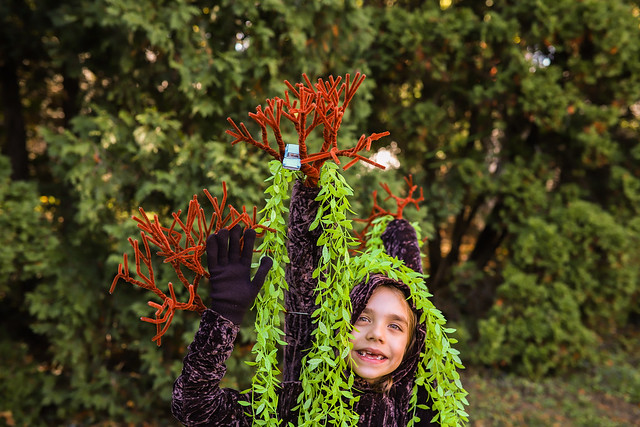 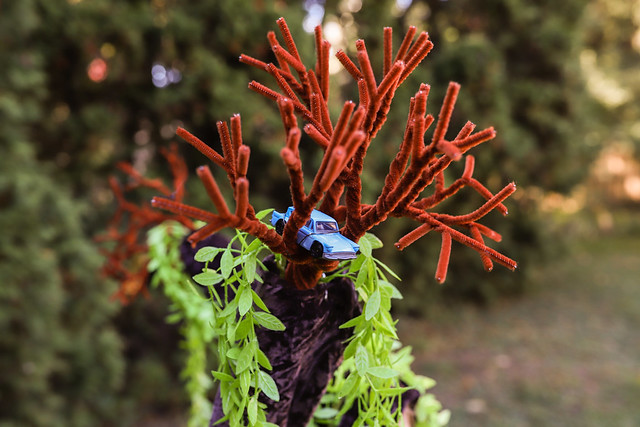 I’m not sure we’ll ever end up with a family Halloween theme again (those stopped when the twins were two) because they all have such unique personalities and passions, but I love that these costumes captured who they are at this moment in time. It was a lot of fun. 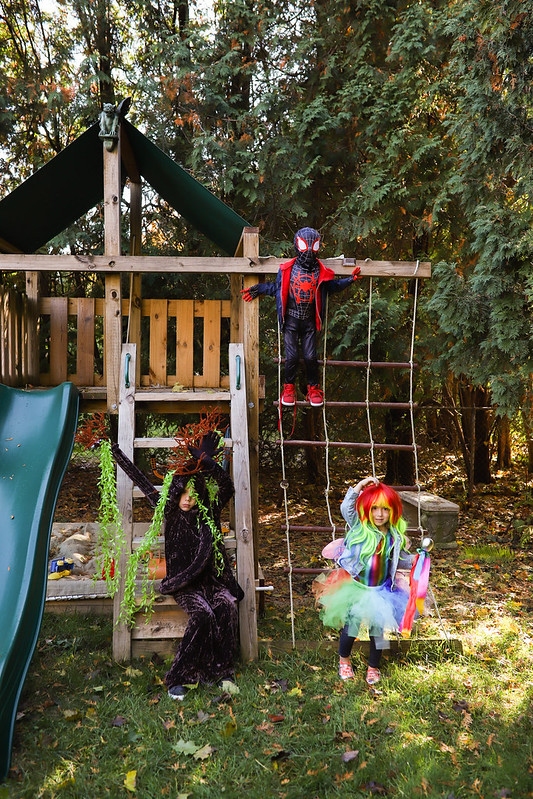