A few nights ago, as the kids ate dinner at the counter and Kristin and I stood in the kitchen tending to them, Jonah said, “Mama D, you’re like the mom who’s the boss.” I exchanged glances with K and sort of smirked while she expressed defeat, until she asked him, “What does Mama D do that makes her the boss?” “Well,” he said, directing his response to me, “because you yell, and you tell our family what to do.” The pride of being in charge immediately evaporated. My confidence as a parent was already wavering, since an hour or so earlier Jonah had come home from school with the following “story tape” across his sweater:

Story tape is something they do at school when the kids are sad or miss their families; it gives them an opportunity to record how they’re feeling so that their parents can read it and acknowledge their feelings at the end of the day. I’d dropped him off that morning and had actually gone out of my way to make sure that he was able to find a book that he was excited about reading, found a teacher who agreed to read it to him, and sent them on their way. Most days, however, he likes to wave to me from one of the windows as I head out to our minivan. He doesn’t do it every day, but most mornings I remember to ask him if he wants to. On this particular morning it hadn’t even occurred to me since the search for a book in the science room was out of the ordinary for us. Now that I think about it, part of the reason we went to the science room looking for the book (which we weren’t able to find) was because he’d asked me to bring his own copy of The Magic School Bus in the Time of the Dinosaurs. We’d labeled it with his name (a rocket-shaped sticker I’d dutifully ordered at the start of the school year to label all of his things) and then forgotten it at home; another failure to add to that whopper of a day. When I saw the tape and reflected on the fact that he’d worn it all day long at school, I was crushed. My perfect vision of myself as the kind of mother I long to be is often in stark contrast to the reality of how I show up for our kids, and it’s incredibly disappointing.

I’ve been thinking a lot lately about our expectations for ourselves and how that shapes the way we feel about our lives. A friend of my sister’s wrote this piece about the paradox of potential and how being told that you have tons of potential throughout your life can weigh on you at a certain point, or at least cause you some existential anxiety. I think that’s very real (at least for white people of privilege, and I have to wonder on the flip side what it’s like to rarely be told that you have great potential, but that’s another post for another time), and I wonder about all of the things that contribute to a person’s unique vision of what a successful life might look like. I can remember being a freshman in college and feeling completely overwhelmed by the text in a course about representation of women in the media; speaking with my professor over the phone one evening she said to me, “You’re going to graduate school, right?” I kind of stammered that I was actually only a freshman and she repeated, “But you’re going to graduate school, right?” That stuck with me, and I did eventually go to graduate school even though I had no such intentions at the time. I can also remember being told on more than one occasion, early in my nonprofit career, that I would eventually be an executive director. Honestly, I don’t have much desire to be in charge of an entire organization, but upon occasion those expectations make me wonder if I’m achieving enough in my career. It doesn’t weigh on me too heavily, however, because my priorities as a mother are crystal clear to me.

A friend of mine gave birth to her third child about two weeks ago, and in an Instagram post she mentioned that ten years ago she was certain that she never wanted children. This came as a shock to me because while I do think of her as an adventurous soul who loves having the freedom to explore passions, I also think of her as someone who is incredibly devoted to motherhood and whose identity has been shaped in tremendous ways by that role. We exchanged emails about it and she told me that she always thought that one day she’d wear business suits and makeup and carry a briefcase (not at all a part of her world at this point).

I went to college mostly because I was expected to; it was non-negotiable in my house (and for that I am eternally grateful to my parents) but I didn’t have much in the way of career ambition. Once again, the expectations of others led the way, but I remember being in college and knowing that what I really wanted was to be a mother. I don’t think that I had any specific dreams of being a stay-at-home parent (maybe because I knew that I was expected to find some sort of professional success) but I’d always known that I wanted to have children. Mama K, on the other hand, had no such lifelong ambition. I don’t believe that she ever made up her mind that she didn’t want children, it just hadn’t entirely occurred to her. Of course when you have an LGBTQ identity it can complicate the picture a bit, and I’m not sure that I always knew that I’d end up fulfilling my dream, but I think that it tossed motherhood out of the picture for K in some respects. She thanks me regularly for bringing my dream into our marriage since without it she might never have pursued motherhood at all.

I was reading “mommy blogs” and other content about motherhood well before I was even trying to get pregnant, so I think that I also came into motherhood with the understanding that it was going to be hard. Among my generation of mothers there is no shortage of honest writing on the ways in which parenting can feel like a thankless slog (this is an eternal favorite of mine). In some ways I think that it’s actually become more acceptable to complain about it than to gush about the beautiful moments, but I suppose that’s a social media theme these days: share too much positivity and you’ll be accused of filtering dishonestly and making others feel guilty about the lack of beauty in their own days. At any rate, I think I came into it expecting both the beauty and the challenges. What I failed to anticipate was the possibility that I might not be a great mom. My friend Nancy, who is also the mother of three, recently reflected on her birthday and how her parents might have felt when she (their firstborn of six) came into the world:

As children, we mistakenly believe that our parents have it all figured out. If we knew how clueless, scared, or incompetent they felt on most days we probably would have feared for our survival. It’s not until we become parents ourselves that we realize what a monumental undertaking the whole thing is and that nothing in life can ever prepare you for it.

It’s fascinating to realize once we become parents that our parents were making it up too, and in most cases, we turned out just fine. It doesn’t keep me from feeling tremendous disappointment when I fail, however.

While I didn’t have a clear picture of who I hoped to be as I was growing up, I think that I implicitly assumed that I would be a good mother. I’m not disappointed or surprised by the day-to-day reality of being a mother who is also employed full-time. There’s plenty of writing on that from people who find those realities to be absolutely suffocating, particularly those who pictured themselves with high-power careers (that they love) but I think that I expected the tradeoffs and realities and have embraced them in lots of ways. I grew up playing house, after all. 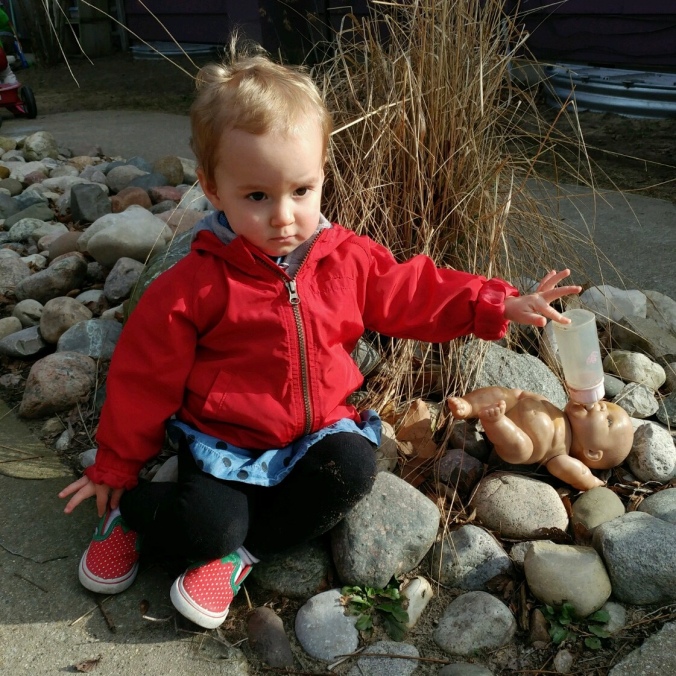 The challenging moments with the kids aren’t nearly as surprising as the realization that I yell way too much, that I’m impatient with them, and that I don’t play with them nearly as often as I should (and that they notice). One afternoon when I was feeling especially overwhelmed by a number of high-stakes, paperwork-related tasks such as tracking down information for the accountant and doing research to dispute our property tax assessment, I told Kristin that maybe I just need to accept that this boring paperwork crap is the part of running a family that I’m good at. Kristin gets to be the goofy mom; I’m in charge of the filing cabinet and the bills. I kind of want to be the goofy mom, but I also know that I’m not very comfortable being goofy and that I don’t play with them often enough because I find getting on the floor to “play” to be kind of confusing and annoying (unless we’re building a marble run, in which case I’m completely taking over). I love being with them, and I love watching them play a lot of the time, I absolutely love reading to them, and I truly enjoy talking to them. I know that I’m not failing as a mother all of the time, but I want to be SO much better. I want to believe that my potential is greater than the mom I am now, and that I can still get there before they’re grown up.

Sometime between dinner and bedtime of that same evening, I sat on the floor of the kitchen with Jonah and told him, “I’m sorry if I haven’t been a good mom lately.” “Yeah,” he said, “you’ve been yelling at us a lot in the morning. You can get mad without yelling. That’s what Gladys taught me.” Gladys was his day care provider in New York, and she had the patience of a saint. “I’m sorry I’ve been yelling, I’ll try harder not to yell,” I said with tears in my eyes. “Can I have another chance?” “Yes, you can have one more chance,” he said. The limit caught me off guard and suddenly I was left wondering how many chances we really get with our children, and how long they’ll believe that we are good despite evidence to the contrary. “What happens if I run out of chances?” I asked, fearfully. He smiled, “No, you can’t run out of chances.”

I pray that we can both remember that even in the toughest moments, and that it’s true.

One thought on “On expectations, potential, and the people we become”