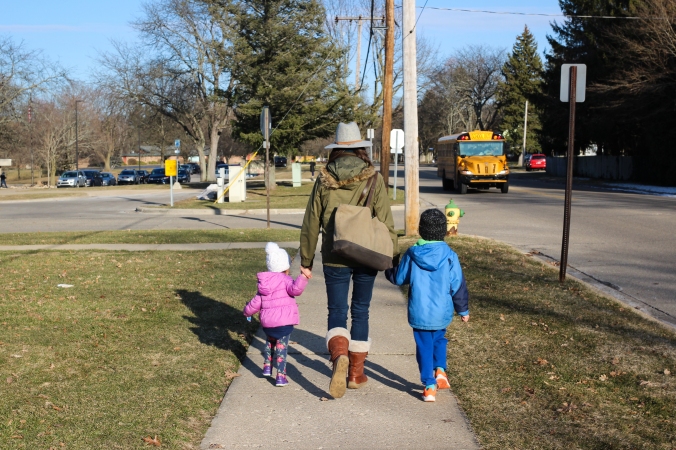 Last night was kindergarten orientation, and I’m not ready. I’m not ready to have a big kid; I’m not ready for him to not be a baby any longer. I’ve been dreading this day for well over a year, ever since we attended last year’s orientation on the slim chance that we might send him early (but didn’t, because why rush them through their childhood if we don’t have to?). It was clear to us then that he was beginning to really thrive in his Montessori-style preschool and that he would do far better there for another year than in the outrageously disappointing public education system. But we knew even then that he’d end up in public school the following fall, because the public schools are a big part of why we moved here, and this particular public school is a part of why we chose this neighborhood.

But I’m not ready. I’m not ready for a million reasons. I see how much he loves to learn when he’s able to direct his own learning, when he’s able to choose the science room or the art room or the blue room and can choose whether to bake or do an experiment or engineer something with building toys, or just to strap on a cardboard box jet pack and build a catapult and launch action figures into the trees. In public school I fully expect his experience to be similar to my experience. He’ll be expected to sit quietly in a chair for most of the day, complete worksheets, and learn on someone else’s (tight) schedule exactly what they want him to be learning in precisely that moment.

I’ve been having some irrational hangups lately that are surely coming from my anxiety about him growing up. It’s becoming clearer and clearer to me how much I dislike “big kid” boy clothes. While I’m sure some of it has to do with my actual taste in boys’ clothing, a bigger part of it probably has to do with what those clothes represent in my mind. He needs a new swimsuit and the other day I found myself venting about how ugly I find all of those ultra-long swim trunks to be on little boys. “Why can’t they give them normal length shorts?! Little boy length shorts that fall mid-thigh!?” I complained. “I can’t stand those swim trunks that fall below their knees and remind me of frumpy teenagers.”

Then there were the shoes. The kids needed new shoes and when we took them to our local shoe store I was disappointed to find that the few brands of truly stylish boys’ shoes, the ones that I always gravitate towards, don’t come in sizes large enough for Jonah at this stage. He ended up with this awful pair of orange tennis shoes that I absolutely hate. On the drive home I was full of regret and angry at myself for not just saying, “Let’s not buy shoes today. We’ll find something better elsewhere.” The shoes reminded me of a particular stage of boy, one that I’m not eager to embrace. I know how harsh and ridiculous that sounds, but hopefully it goes without saying that I couldn’t love this boy of ours any more than I do; it’s a caricature of the future (and surely my own past) that I fear and don’t feel prepared for. 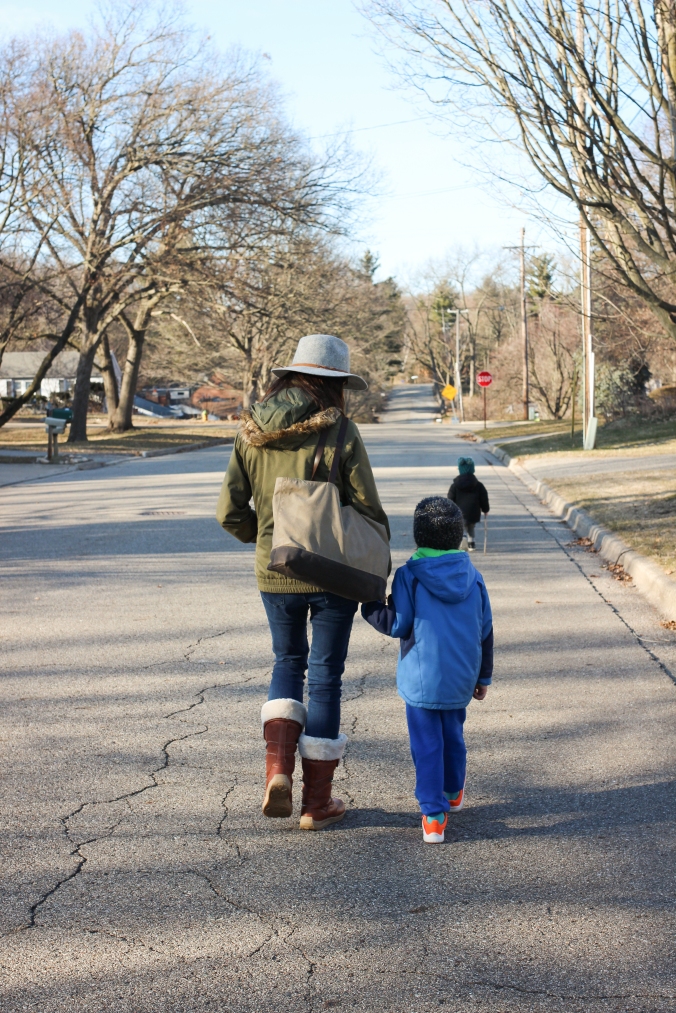 On the evening that we walked to the school for orientation, Jonah was wearing these floppy, royal blue sweatpants along with those ugly orange shoes. He was only wearing the pants because it had been “blue day” at school and he decided at the last minute that those were more blue than the navy leggings we’d picked out the night before. But when he came home from school and we prepared to walk over, I told Kristin that I wanted him to change. I couldn’t handle the combination of those frumpy pants and those awful teenager shoes and the fact that we were going to sign him up for school that I wasn’t ready for. It didn’t take much for Kristin to convince me to let him be, and I did, but the struggle was real for me.

I cried a little on the walk over, and Jonah asked me why I was sad. “You know how I always tell you guys not to grow up too quickly?” I said. “I’m feeling a little bit sad because you’re going to kindergarten and that means that you’re growing up, and I don’t feel ready for you to grow up.” I knelt down in the street and looked him in the eye. “But it’s OK for you to be excited. I want you to be excited about kindergarten, OK? I really want you to love it, and I think that you will.” That last part was a bit of a white lie, but it felt necessary. I didn’t want my sadness to upset him. “OK,” he said, and he gave me a hug.

I’m not at all sure that he’ll like it, but I hope that I’m wrong. Sometimes we worry that he won’t like public school because he’s a little bit different than most kids. He has some sensory processing issues that we’re dealing with, and we’re concerned that he won’t do well in the noise and the chaos of a school with so many students. On the flip side, maybe I want him to be different and I worry that the people he’ll meet in school will influence him in ways that I won’t like, and he’ll turn into one of those frumpy, video-game loving boys who I think are so awful. Sometimes I fear that he’s too different for school to be a fit, and other days I fear that he isn’t as different as I want him to be.

I sent this picture to Kristin one day and said, “this is what I wish school could be like for our kids.” I scroll through that Instagram feed and dream of open time and space with endless creative possibilities, learning outdoors through mud and sunlight and breeze, field trips that we choose when we choose them, kids learning how to learn and explore and cultivate curiosity at their pace rather than memorizing things for a standardized test. But the truth is that I’m probably not going to home school anybody (unless things really go badly in public school, and in all likelihood they won’t) although I did just put this on hold at the library, so it’s yet to be seen where this nagging desire will take me. Maybe I just need to take that spark and figure out how to compliment their institutional learning with something far more beautiful and self-directed, but I’m not sure what that looks like yet (or how to fit that into an already-full day). For now, Kristin and I have agreed that kindergarten is a try, not a permanent commitment, and we’ll pivot if it feels right.