It was the first weekend of summer vacation and I’m exhausted and ready for bed but want to reflect on our weekend a bit before it all drifts away.

First of all, this boy finished up preschool and I did cry a few times throughout the day. Once as I got back in the car after dropping them off, then later on as I handed off a bunch of garage sale items to a neighbor (including baby clothes and booster seats that we no longer have babies for), and a third time when Kristin and I met with his teacher for his final conference.

He chose his outfit for the last day: an excavator tee and a strawberry skirt that I made for him at his request. He’s worn that skirt only three times: once on a sick day (and out to lunch with me, where the waitress called him “she” but he never corrected her), and one other time to preschool when, as he walked into the room where they start their day, another boy immediately said (with distain), “Why are you wearing a dress?” Jonah frowned and said, “It’s not a dress!” and then went to sit alone in a corner. I walked over to him and told him that not everyone knows what he knows, that there’s no such thing as “boys’ clothes” and “girls’ clothes” and that maybe he could educate his classmates. He immediately stood up with conviction, and I watched as he walked over to the large group and announced, “There’s no such thing as boys’ clothes and girls’ clothes!” When he wanted to wear it again for his last day I was proud of him for being so unfazed and so certain in his wardrobe choice.

That evening after school we went to the first summer “Movies in the Park” which was The Lion King. Those movies start SO late (at dark, which is 10:00 here in the summer) so about halfway through Kristin and I were kind of done. We tried hard to convince the kids to call it a night, even bribing them with snacks, but they all insisted on staying until the end. 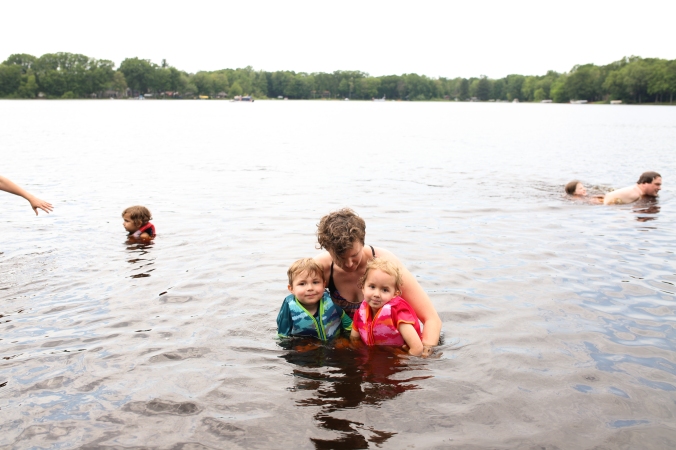 On Saturday we went to a birthday party for one of Jonah’s best buddies out on a lake not far from town. Jonah is crushing his, “ride more boats” resolution for 2018, and managed to ride in two different kayaks and a speed boat in a single day. Kristin reminded me on our drive back to town that evening that this is one of the reasons we moved back to Michigan. For days like this, for such easy access to lake living. Even the 30 minute drive back felt vacation-like, with the kids sleeping in the back from so much sun and activity, and the windows open on a warm summer evening.

It was ridiculously hot and humid today, and for some reason I decided to tackle all sorts of yard work while Kristin cleaned the house indoors. We were both exhausted by 4:00, but still happy to see my parents when they came over to celebrate Father’s Day. My dad brought the materials and tools to put in the treehouse pulley that Jonah has been asking for, and they worked on it together, even in the sweaty weather.

My mom brought all sorts of wonderful plants and trinkets to build both a fairy garden and a monster garden, and worked on it with the kids. She left the monster garden with us for the time being, and it’s particularly wonderful.

It felt so much like true summer this evening, and it makes me a little sad to go back to work in the morning while everyone else has a lazy day, but I’ll make the most of the weekends and long evenings. I know there’s more good to come.