When Kristin dropped off a large bunch of bananas to our next door neighbor just before we loaded up the car to to leave for Charleston, Colleen told Kristin that she recalled someone saying that we would never attempt that drive again after the first time. “I think that may have been the same person who bought way too many bananas before leaving for a road trip. I wouldn’t trust her.” Kristin replied with a wink. This is actually the third time we’ve driven from Michigan to Charleston, and by now I think that we’re getting pretty good at it. By no means am I suggesting that we’re improving our speed each time, or getting more efficient in any way. We’re just good road trippers, all five of us, and by now we’re all able to take the 2,000 miles (round trip) in stride.

We make it a point to stop somewhat strategically along the way, and this year we decided to check out Mammoth Caves in Kentucky, a National Park that I have vivid memories of from my own childhood. I think that the kids were all impressed by the cave, but Jude was disappointed that we never saw a single bat.

We also stopped at Tryon International Equestrian Center, which was a pretty impressive place. It was definitely more for me than for anyone else but they had a free carousel and a sushi restaurant, and the cold day provided us with a practically solo front-seat show, and the kids enjoyed seeing young riders and their horses. (Sidebar, does anyone else remember this book series from childhood? I LOVED these as a kid. I remember checking them out of my elementary school library repeatedly). We’ve been to Charleston so many times that we have lots of favorite things that we always make sure to repeat, like ice cream at Jeni’s with Maris and Fields, the South Carolina Aquarium, and our favorite art gallery, Robert Lange Studios.

If you’re ever in Charleston, you must visit RLS. It’s been voted best gallery in Charleston year after year and it’s the most welcoming place in the world, hence the swing full of  children right in the middle of five-figure art.

This time though, I made it a point to check out some new things we’d never done before. Kristin was excited to visit the Birds of Prey center (which was actually cooler than I’d expected, not being much of a birder myself), but I was most excited to visit Botany Bay, a 3,300 acre wildlife preserve located on Edisto Island. Due to its preserve status, no one is allowed to remove anything from the island. And because of rising water levels, many of the trees that used to line the coast have now become huge pieces of driftwood, none of which can be removed. The beach is covered in shells, and the dead trees are perfect for climbing (not to mention photography).

I love seeing these kids together. Watching them love one another is one of my greatest joys. There’s never enough time together, but I’m grateful that we all make it a priority to get together a couple of times each year.

As we drove out of Charleston, Vivienne wept, “I want to be with Papa Doc and Gigi and Maris and Fields.” She was devastated to leave. I wish it was easier to give them a little more time together.

For the trip home we decided to splurge and stay in a treehouse in Berea, KY that we found on AirBnB. I can’t say that it was quite as magical as the cottage we stayed at in the mountains of NC last year, but it was still pretty neat.

The kids loved the loft and the chickens, didn’t mind the outhouse one bit, and we even had a rainstorm that was beautiful to listen to on the metal roof as we slept. Rural Kentucky makes for a very pretty drive. 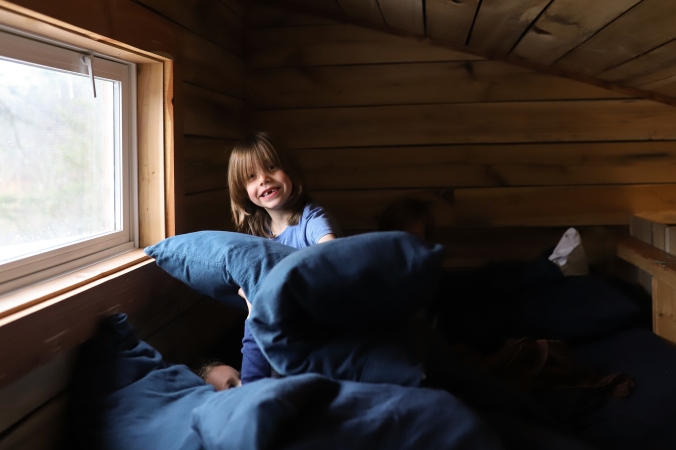 The taste of spring that Charleston provides this time of year makes us all incredibly eager for spring to arrive in Michigan. We’re all craving lots of time outdoors and are keeping an eye out for signs of green.