Have I mentioned before that Kristin is doing a yoga teacher training program in Chicago this fall, and that she’ll be gone for nine weekends? I’ve been incredibly anxious about it, and it kicked off this weekend. To be honest it wasn’t as bad as it could have been. I had plans Friday night and getting ready for the sitter and getting out of the house was much harder on my own, but the days went by fairly easily for the most part, and the weather has been so cool and beautifully fall-like that I was happy to skip the usual weekend field trips and stay home a bit more.

The kids had gymnastics Saturday morning, which they’re all loving in a way I couldn’t have imagined (especially after the fiasco that was Jude’s dance class last spring – the one where he sat on the sidelines or actually ran out of the room every single session). Jonah is in the “big gym” now, which he seems quite proud of, and he continues to tackle new challenges with a confidence and curiosity that I’m thrilled to see in him.

On the way home we went to the fabric store to pick up a few things for Halloween costumes, and yeah, the kids were climbing on rolls of fabric and unspooling thread and it was a bit of a disaster, but I still left feeling excited for this month of crafting that I so look forward to.

After lunch we walked down the street to a neighbor’s house where they were puppy sitting and found not only the two friends who live there but two other girls from down the street. The seven kids played for an hour or two, and it reminded me again how thankful I am that we’ve made so many new neighborhood friends this year. While we were there the kids noticed that there were small boards nailed to the side of the tree in their front yard, with a small platform built into the branches. Both Jude and Jonah made an attempt and decided not to go all the way up; reaching the platform was tricky and involved not only scaling the precarious ladder, but maneuvering 240 degrees around the tree trunk once you were up. Vivi wasn’t willing to give up so easily. She asked me to put my hands on her while she climbed, but didn’t want any other help. I could tell that she was a little bit afraid, but even more determined. She made it to the platform and had a huge grin on her face. Once she climbed down (which may have been harder) she immediately decided to do it all over again. I love what a badass she is.

I didn’t have my camera (or even my phone), so I snapped a quick photo with my friend’s phone. I wish I’d been better prepared, but you get the idea. 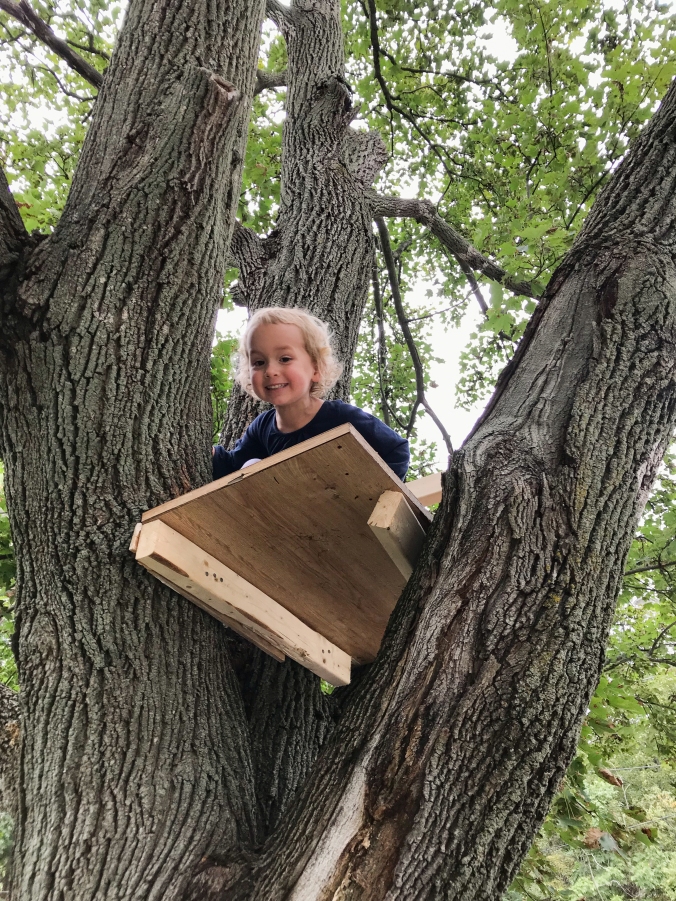 I decided last night that we would bake cookies today. We haven’t done it since Easter, and it had been long enough that I’d forgotten how stressful that can feel (lots and lots of reminders not to play with the dough and to stop licking your fingers) but I was excited to try making them at the new craft table in the mudroom where there’s better light and more room. It was pretty wonderful, although it was a good reminder that we should definitely choose a rug that we’re not worried about cookie dough or sprinkles being mashed into. 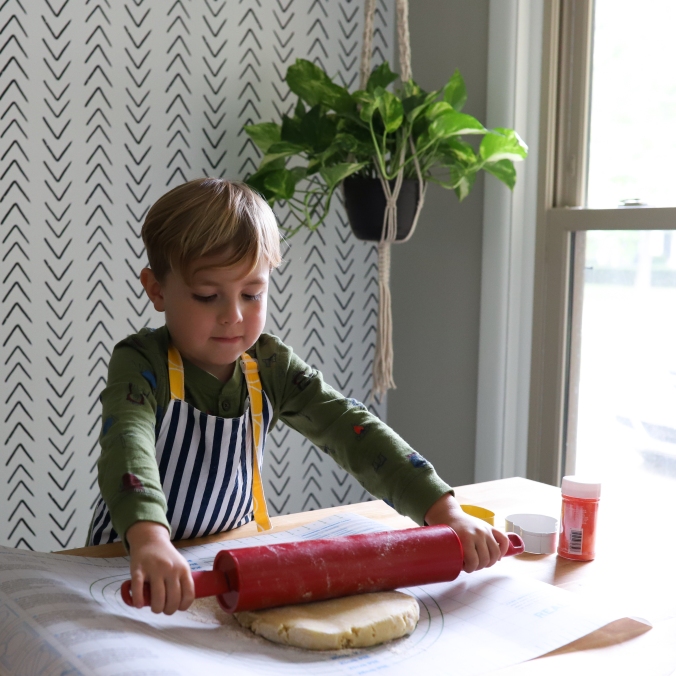 After the cookies had been decorated and the mess had been cleaned up all I really wanted to do was get out my sewing machine and start working on costumes, but by then it was nearly 5:00 and I knew that no one was going to make dinner if I didn’t do it. It was around that time that I hit a wall. I wasn’t my best parenting self this evening, but it’s good for me to be mindful of how these weekends might feel and to choose how to spend our time accordingly. The kids seemed to hit a wall at the same time, probably due to exhaustion, and by some miracle I was able to have them all asleep before 7:30 p.m. So now I’m headed for that sewing machine (while cookie frosting dries at the other end of the table – one of the perks of a 6′ craft table), and I’m feeling OK about the weekends to come. We’ll fill them with quality time and sprinkle in some magic every once in awhile and I’ll do my best to fill the Mama K gap until she returns last Sunday night.