The one element of the swing set that hasn’t been complete since I posted about it was the sandbox. I know that there are a lot of strong feelings among parents about sand boxes and even sand at playgrounds. Lots of people seem to feel that they’re dirty and full of bacteria since they can easily become litter boxes for neighborhood cats, and some parents just don’t want the sand coming into their houses in every shoe and fold of clothing day after day (the struggle is real). I can understand both of those arguments, but for me the tradeoffs are worth it because our kids love sand play so much. I want to make our backyard a place where they have lots of options for entertaining themselves, and giving them a great sandbox as an option was important to me. Some good friends of ours in New York have a wonderful sandbox that was SUCH a hit with all of the kids, so that was my vision. 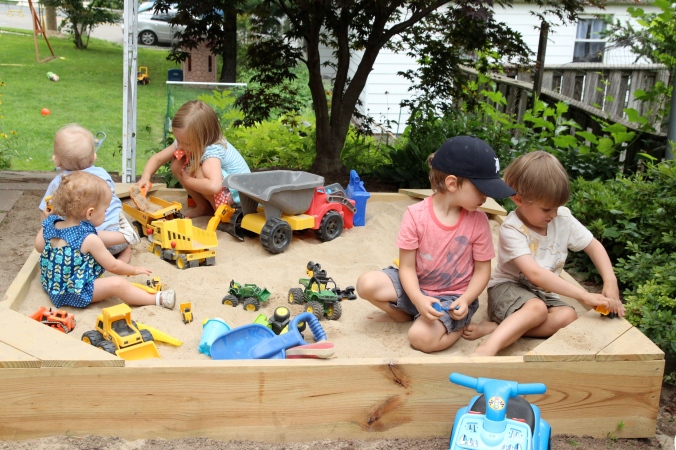 Our friends’ sandbox in New York, and my reason for wanting a great one

When we chose our swing set plans, I chose it in large part for the size of the fort deck, which also turns out to be the size of the sandbox below. We went with 6’x6′ because I wanted to make sure that all three kids had plenty of space to play. Once my dad completed construction I figured that we could get sand in there within a couple of days, the easy part, right? We ordered a pallet full of “play sand” in bags from Home Depot, only to find a California 65 warning label that informed us that the sand contained known cancer-causing chemicals that were proven to cause organ damage. Naturally we were alarmed. As it turns out, silica (which is in all sand, more or less) is dangerous when inhaled, so the safety of play sand has a lot to do with the particle size. We talked to a number of people we trusted and decided to return the bagged sand to Home Depot (they were very gracious about picking it up and even refunded our delivery fee) and instead have washed sand delivered by a local landscaping company. Who knows, it could be exactly the same stuff, but psychologically it felt better. We also figured that if sand is dangerous, it’s the same stuff we played in as kids, so how awful could this really be?

We had one cubic yard delivered, dumped into our driveway, and borrowed a neighbor’s garden cart to transport it to the back. A cubic yard of sand is a lot of sand, y’all.

Jonah was a big helper. He was totally into helping me shovel the sand into the cart and then into the sandbox.

To try to avoid the neighborhood litter box problem I made a cover for it. I found a number of places that sell custom sandbox covers, but they cost roughly $80 and I just wasn’t willing to spend that on it. Instead, I bought a roll of affordable shade fabric that came with a lacing needle and cord, two six-foot pieces of PVC with end caps, and put it together in an evening after the kids went to bed. It cost around $30 total and it works great. Even better, I ended up using the same material to provide a barrier between the dirt and the sand (so that the kids wouldn’t mix the two if they dig all the way down). That saved me from having to buy a huge roll of landscaping material when I only needed six feet. 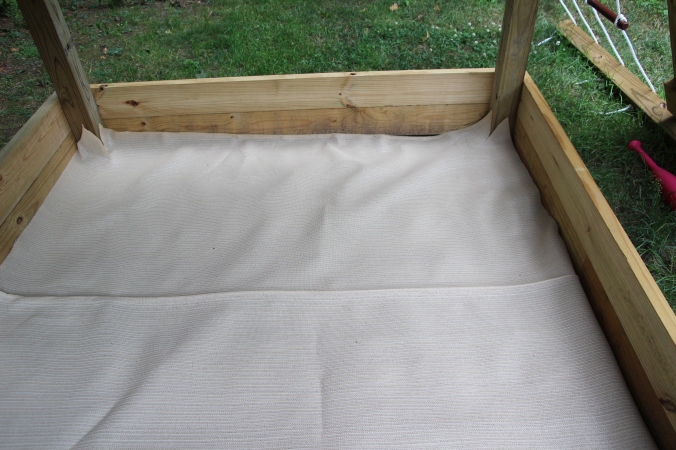 Sewing two ends of the shade fabric onto the PVC was easy, and the needle and cord that it came with was perfect. 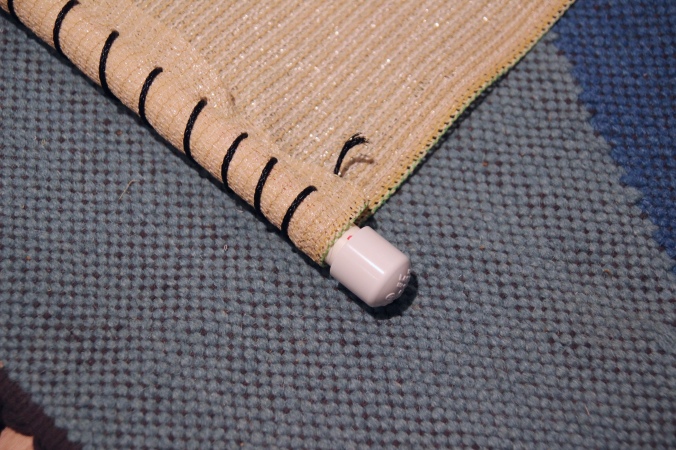 The cover lays across the sandbox nicely, with the PVC weighing it down on two ends. It’s lightweight enough that it’s easy to roll up when the kids want to play, and it’s breathable, which means rain will go through rather than pooling on top and causing a mess when we want to remove it, and the sand can dry out beneath as needed. I’m really happy with the way it turned out, and especially the price.

The kids are loving it and have spent a lot of time in it over the past two days, and we look forward to sharing it with friends. 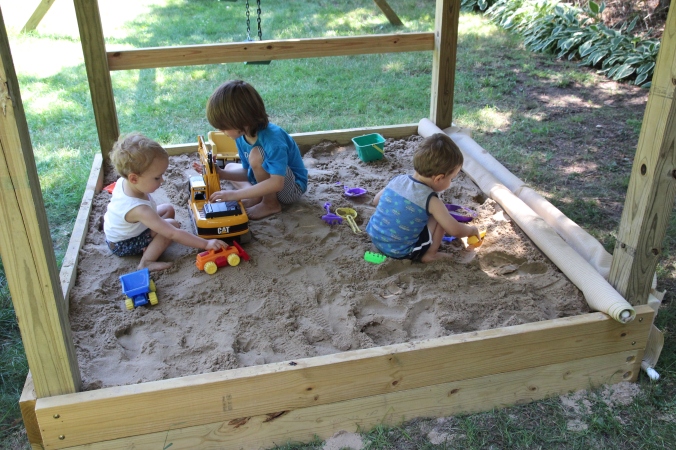 One thought on “The sandbox, and an affordable DIY sandbox cover”