When it comes to home projects I wouldn’t say that I’m especially handy. When the people on home shows are searching for a fixer that they can “put their stamp on” I’m genuinely perplexed. Sure, I have a small and modestly equipped toolbox and a cordless drill, and according to Jonah that makes me a construction worker, but I cannot imagine why anyone would want to spend every weekend engaged in manual labor if they didn’t have to.

Now that I’m a homeowner, however, I’m beginning to see the appeal of learning how to care for and maybe even improve our space a little bit. And if I can do it myself while saving some money, that’s even better, right?

We were fortunate to get a number of money-saving hand-me-downs from my parents when we moved into the house, and one of those was a patio set that my parents have had since I was around Jonah’s age. I have lots of memories of it in the backyard where I grew up, and I love that it has so much history. It’s a nice sturdy wrought iron set, but two of the chairs were broken, and the whole set had some rust and a lot of wear. 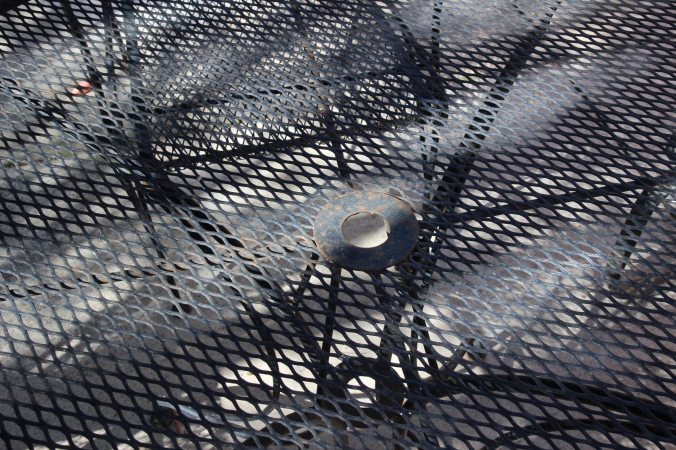 When my parents gave it to us, my dad suggested that we could paint it if we wanted to, and both K and I thought that sounded like a fun way to brighten up the backyard. I’ve never spray painted anything in my life, so I had few appropriate expectations going into this project. I did a little bit of Pinterest exploration to gather tips, chose a color that we were excited about (Rustoleum Lagoon), and went shopping for supplies.

I was thinking of painting it on the patio, and I’m so glad that I called my dad beforehand to say, “How on earth do I do this? Isn’t it all going to end up covered in leaves and flower petals?” He told me that the garage was a far better choice (no kidding) so I spread out a number of plastic tarps across the center of the garage, moved the furniture inside, and got to work. After washing it and letting it dry, I started with a coat of Rusty Metal Primer, which turned it all a solid rust color. 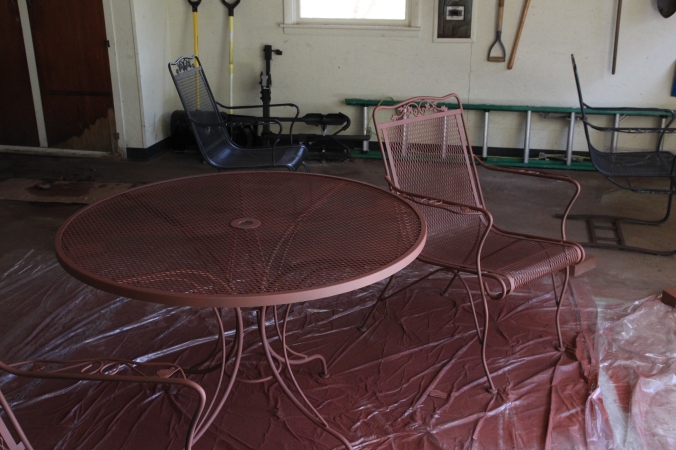 This phase of the project gave me a pretty solid understanding of how unpleasant this whole experience was going to be. I learned a number of valuable lessons, which I will now pass along to you, dear reader.

When I was in New York, a friend asked me what project I was working on that I was really excited about. I asked her if it was possible to be excited about a project but also hate everything about the process. After finishing the table and knowing that I had four chairs ahead of me, I declared that we should have just bought new, colorful patio furniture. I’m not sure that we saved all that much money ($60 in welding to repair the broken chairs, roughly 25-30 cans of paint, plastic tarps, rubber gloves, disposable masks, safety goggles), and the process wasn’t the slightest bit enjoyable, but I do really like the end result. It makes the patio a lot more fun, and the kids seem to love it. They wanted to eat dinner at the table the first night that it was back out on the patio (even though it was something like 55 degrees out). 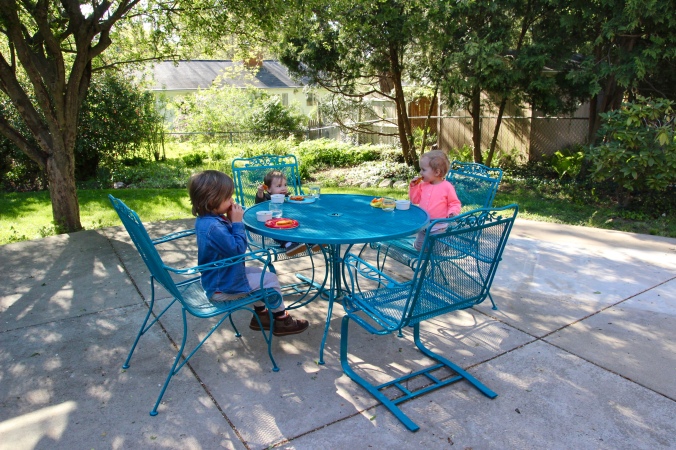 While the furniture was in progress in the garage, they would come home from school and tell me how pretty the chairs looked, which was surprisingly gratifying.

I’ve been looking forward to making our yard more playful, and I feel like this is a big step in that direction. My parents return from Charleston in a week’s time and the next big project on the agenda is a swing set (despite Jonah’s faith in my construction worker abilities, that’s way out of my league – we need to call in Papa Doc for that one). I’ve been debating between a kit and a total DIY approach and you would think that this experience would have made that choice clear, but since I expect a swing set to be a ton of work no matter how we slice it I’m still undecided. More to come on that one when it happens.