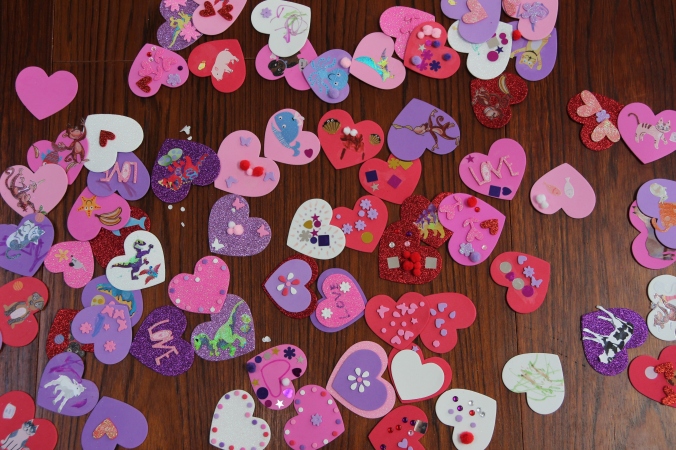 I have to admit, a couple of weeks ago when I began to wonder whether the kids’ preschool would suggest that they bring and exchange valentine cards, I was feeling a little bit grinchy about it. I pictured the entire classroom buying boxes of character cards and handing them out completely at random (since none of the kids can really read or write anyway). It felt completely devoid of any sentiment, and for some reason I tend to be really character-averse when it comes to things like…well, almost anything really, but mostly things like clothing, backpacks or other items that aren’t specifically a toy that allows some imaginary play; it feels like free advertising. We have a billion Octonauts toys (see our most recent Halloween for evidence of my own hypocrisy), so it’s not as if we don’t do characters at all, but I’ve never loved those valentines. I was sort of hoping to skip it, but then a blogger I enjoy posted something on Instagram about her plans to do all sorts of fun, over-the-top things throughout the month of February, and I realized that there was joy to be found if I made some effort. Not everything has to be so utilitarian, and sometimes I need a reminder. So what if exchanging Valentines doesn’t do anything; it’s a reason to do crafts and bake cookies.

I spent Thursday night, all day Friday, and all day Saturday at a super intense anti-racism workshop (which was powerful and necessary and gave me a lot of hope for Kalamazoo because of all of the wonderful people representing local organizations who were there making commitments to real change) and knowing that I was losing a lot of precious weekend time with the kids made me want to pack even more special moments into Sunday. Now before you start down the “I’m not a Pinterest mom…” or “I wish I could do things like this with my kids…” path, know that at one point early in the day, Kristin stopped me and gently asked “Is this the most relaxing way for you to spend the day?” which was a poorly disguised way of saying “This seems to be causing you a great deal of stress, do we need to do this?” But it was important to me, and by then I was committed and nothing was going to get me to back down. She later apologized for calling me out and pointed out that she did observe many moments of real joy. I’m still glad that we did it. 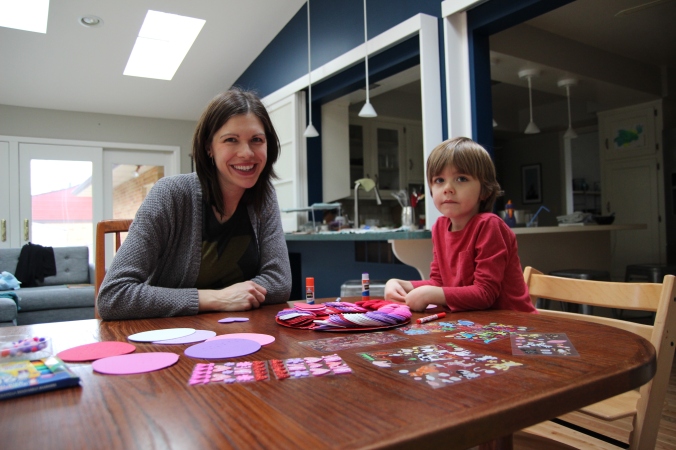 We didn’t attempt one of those adorable, candy/valentine combos that usually involves some sort of clever play on words. I just bought a crapload (it was actually a “party platter” if you must know) of foam hearts and a bunch of additional stickers, along with some markers and glue sticks. It was WAY more than we needed, but the kids were honestly really into it! So I’m glad we had extras. 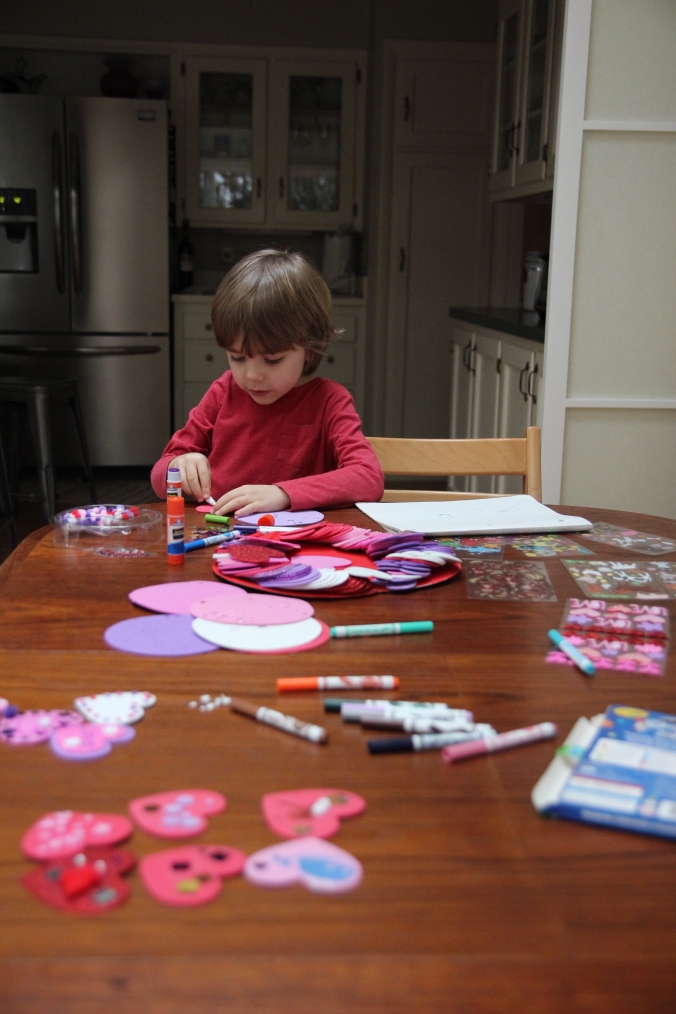 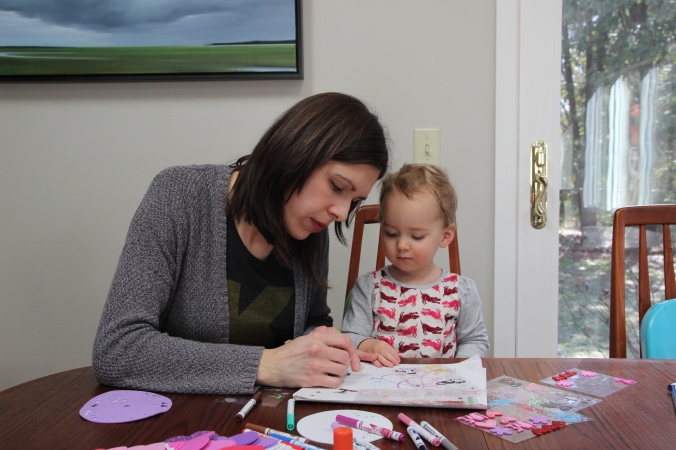 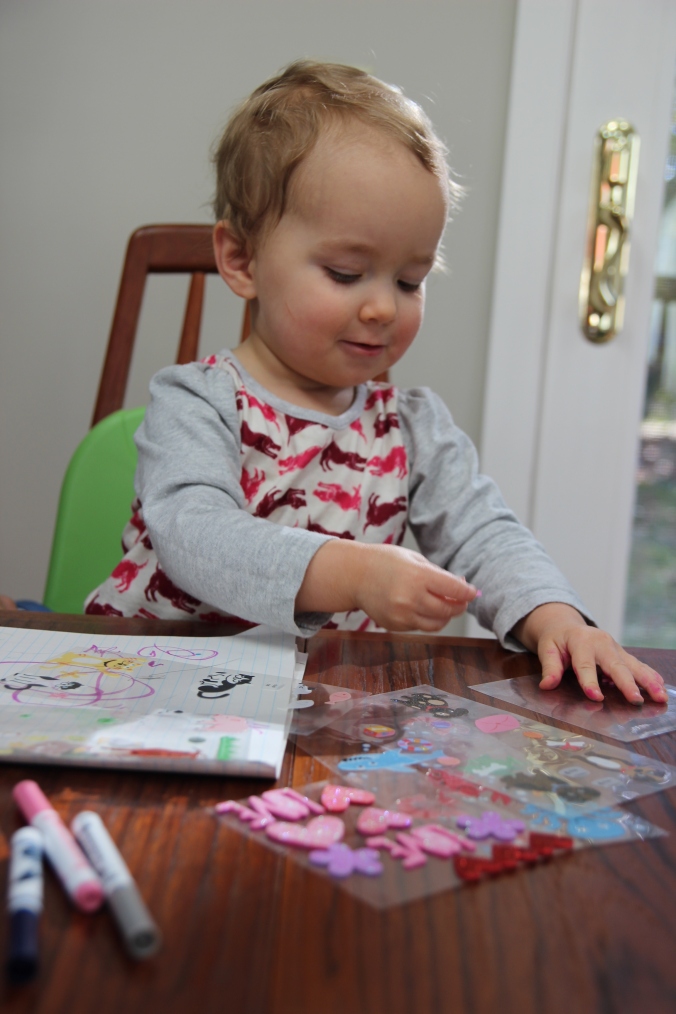 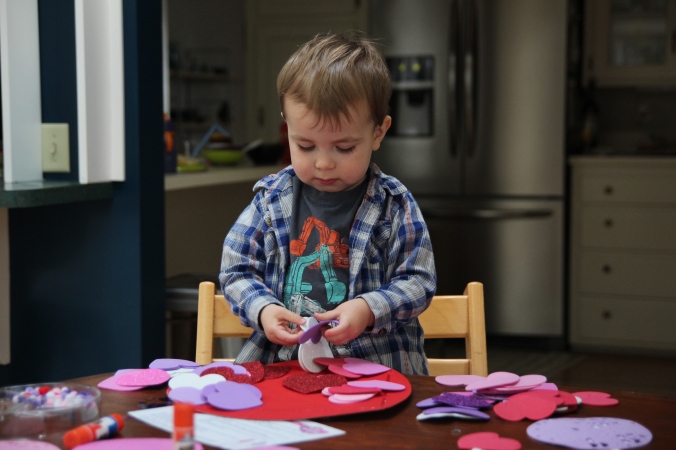 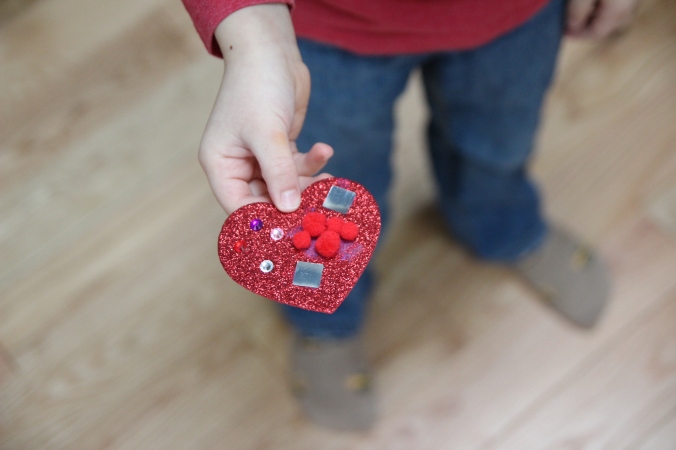 Even after we took a break to bake cookies Vivi said that she wanted to do more art, and went back for more. 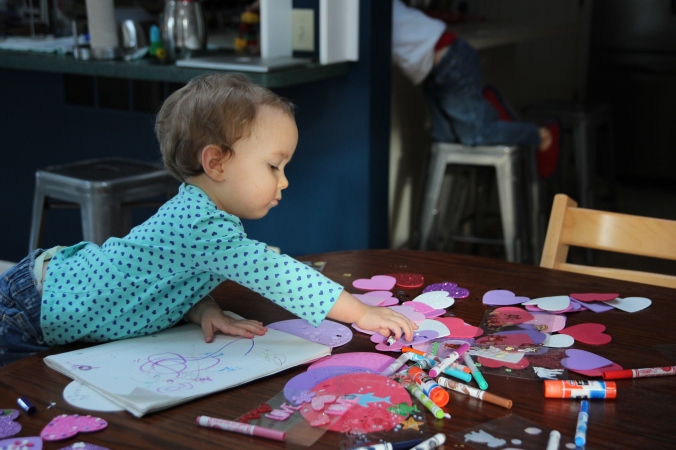 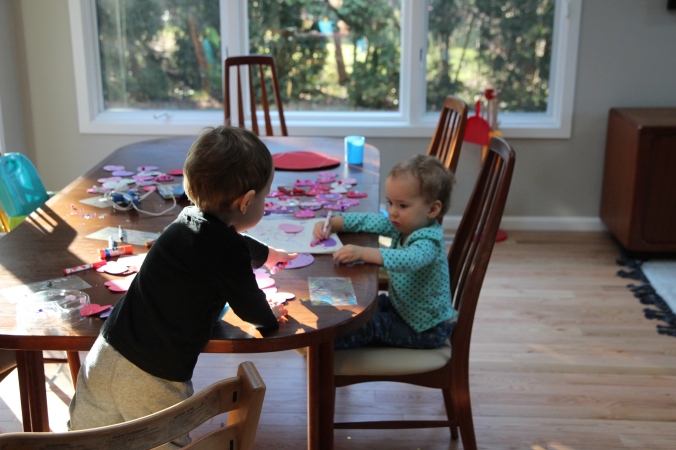 The wardrobe change is because it was post-cookie-mess, and they were completely covered in flour. 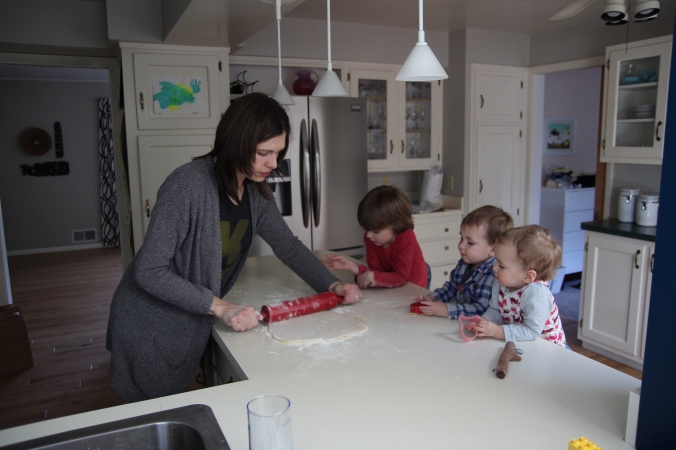 It’s so funny and wonderful, Jonah is at this age now where he takes on crafts and activities with so much more independence than ever before. He was just cranking through the valentines totally on his own, and the same was true for the cookies. While Jude just wanted to roll everything flat and poke a variety of toy kitchen implements into the dough, Jonah was busy cutting out hearts and dutifully carrying them over to the cookie sheets. Vivi actually tends to be the same way which is somewhat surprising given the age difference, but her over-the-top independent streak is probably the explanation. 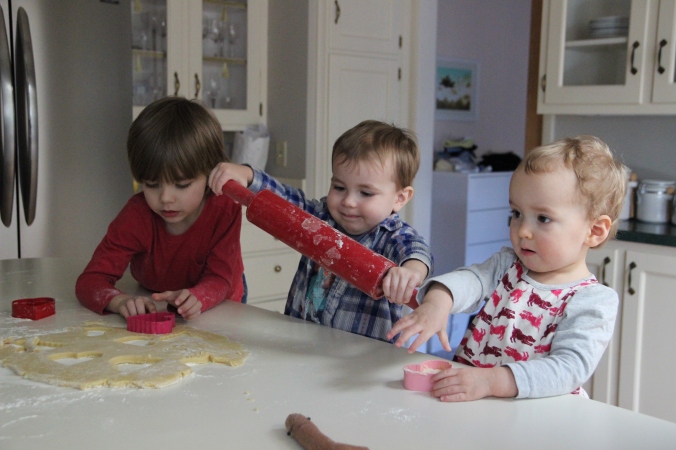 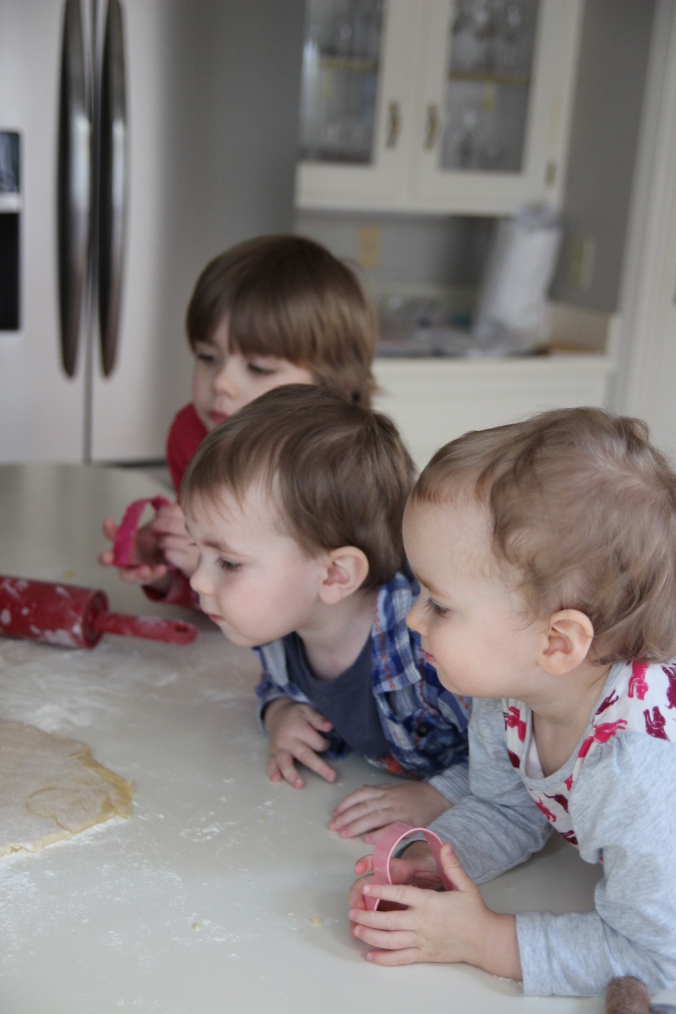 It was so cute watching them watch the cookies bake. They could hardly wait. 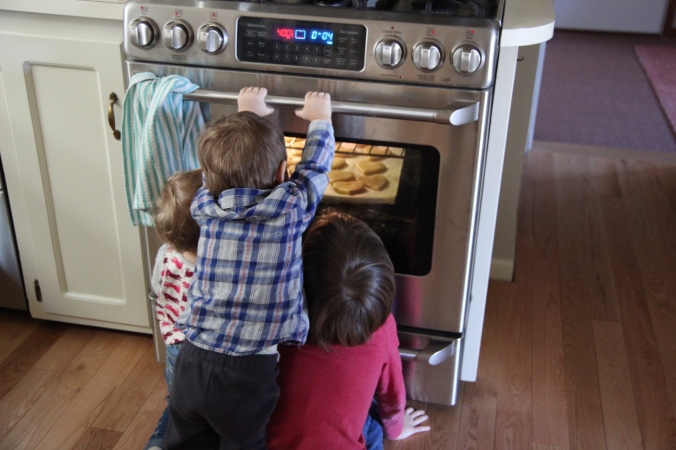 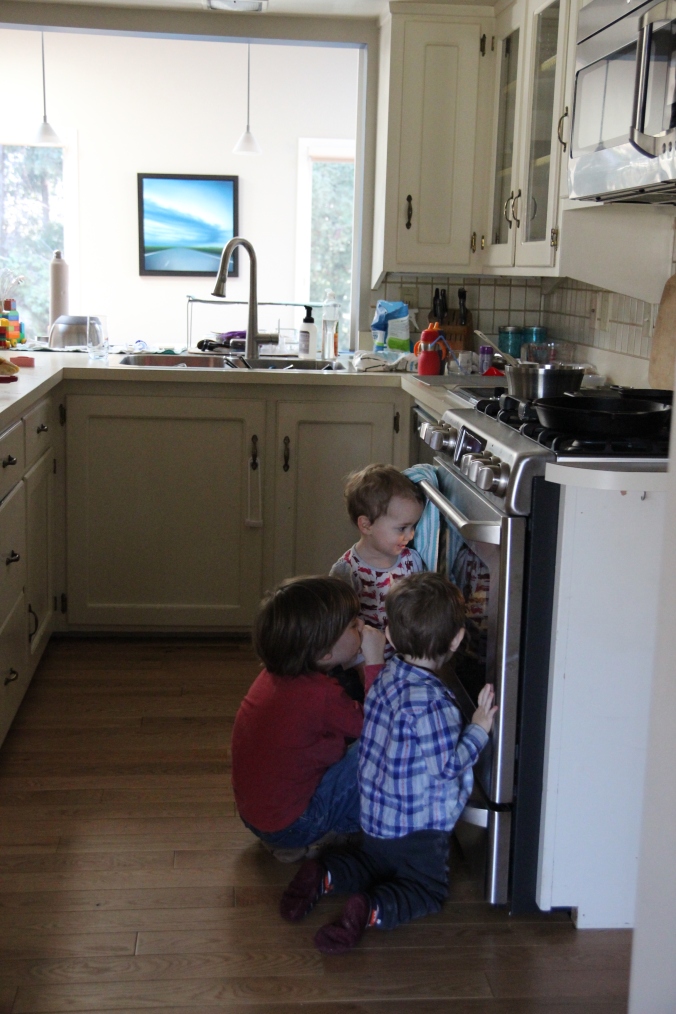 Unfortunately the afternoon got away from us and K and I ended up doing all of the decorating solo after the kids were asleep, but I did decorate one for Jonah before he went off to bed and we saved a few more for tomorrow. The rest are going to the kids’ teachers because I cannot have this many butter-frosted sugar cookies in the house or I’ll eat myself sick.