We had the most beautiful snowstorm this past weekend. One of the most magical things about being in our new home is having the opportunity to really notice and appreciate how it looks and feels at different times of day, in different seasons, and different weather. Seeing how our backyard looks when it’s covered in snow has been such a wonderful discovery. For some reason (which I’m sure has a simple “what they eat grows in your yard” explanation that we have yet to look up), we have lots of bluejays and cardinals in our yard. There’s a Mary Oliver poem that Kristin loves, from a book by the same name, called Red Bird. I feel like we now understand the inspiration for that poem. We love to point the cardinals out to the kids and they seem just as eager to stand at the window and look for them, bright red in the snow-covered bushes.

Friday night Jonah and I went to the store to buy sleds, and Saturday morning we went out front to play in the snow. Our street seems to be low on the city plowing priority list, which was actually convenient because we were able to pull the kids up and down the street in the sled.

Jonah loves it, and also loves helping us to shovel the driveway. Vivi quickly learned to love the sled as well because it kept her out of the snow. This is how she felt about actually being in the snow. 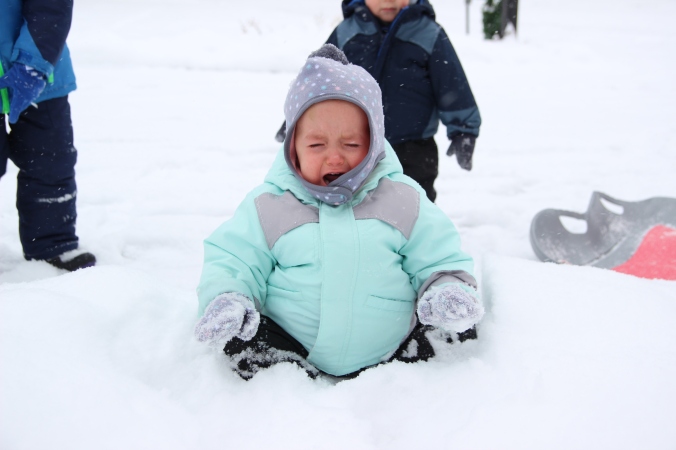 Jude tolerated the first ride or two, but then decided that the sled really wasn’t his thing. He preferred to stand around with a bucket and shovel and sort of poke at the snow. 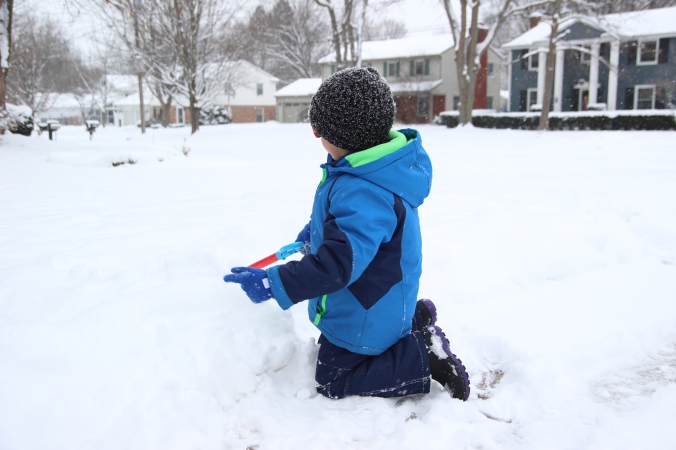 I also just love cozy, indoor fun while it’s snowy outside. While the twins napped after playing outdoors, Jonah played with trains in the great room. There’s nothing like PJ pants and a ski sweater to keep you toasty.

I also decided that this year I wanted to start a Christmas cookies tradition with the kids. Can you believe I’ve NEVER done this? I mean yes, I’ve made cookies. But I’m fairly certain that I’ve never made rolled cookies before. We’ve had cookie cutters lying around, but they’ve always ended up in the play doh bin. I went out with Jonah and Vivi and we bought a rolling pin (never owned one!) and a ten-pack of holiday themed cookie cutters, some sprinkles, food dye (I know, but I wasn’t going to do turmeric and beet flavored icing), and all of the ingredients for sugar cookies. We did it over two days because we got a late start with the dough and baking, but I’m so glad we did it.

Vivi was out-of-sorts, so I was wearing her while we made the dough. She got involved later for the rolling and cutting portion, however.

Once they learned that you can eat raw cookie dough it was all over. We pretty much had to cut their involvement in that stage short once Vivi started putting handfuls of dough into her mouth. 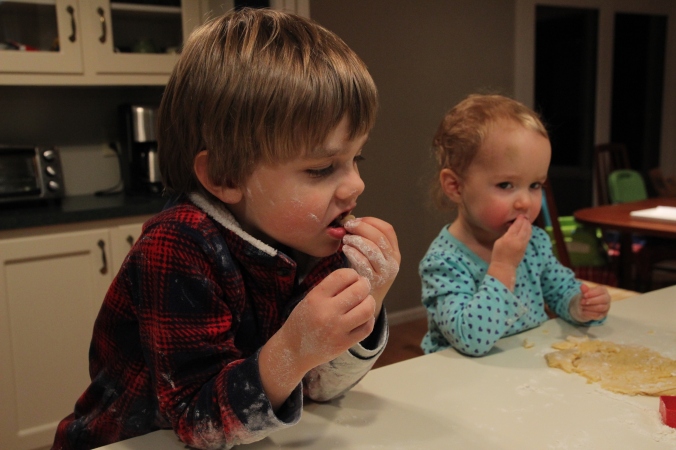 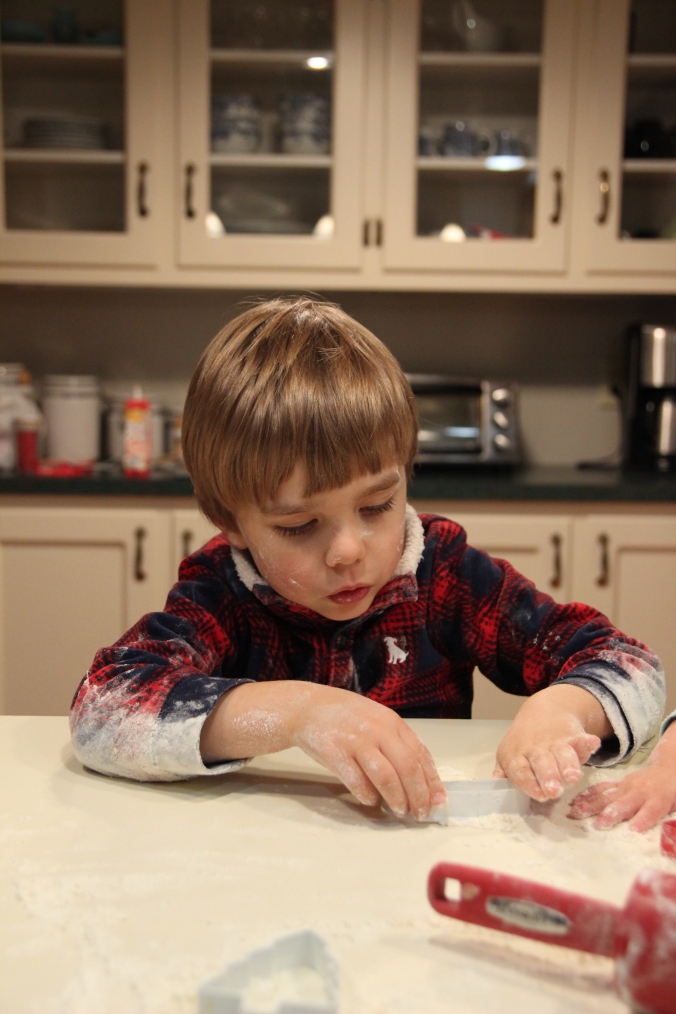 Kristin and I did some decorating on Sunday night after the kids went to bed, but we saved a whole bunch for the kids to do, and because they ended up with a snow day on Monday (and I took the day off to join them) we were able to decorate then. 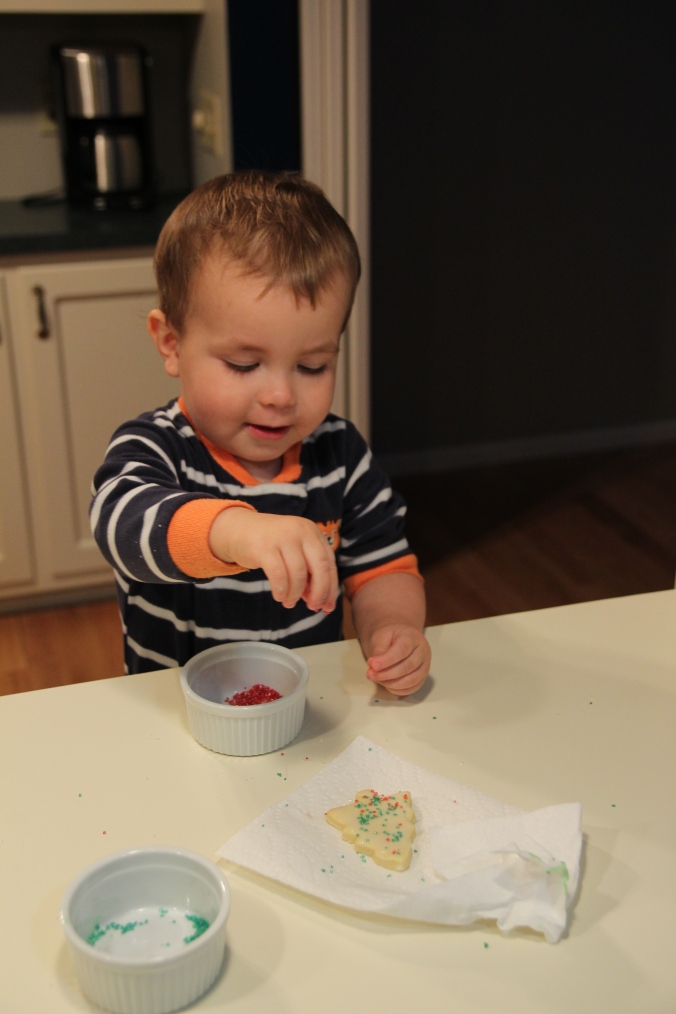 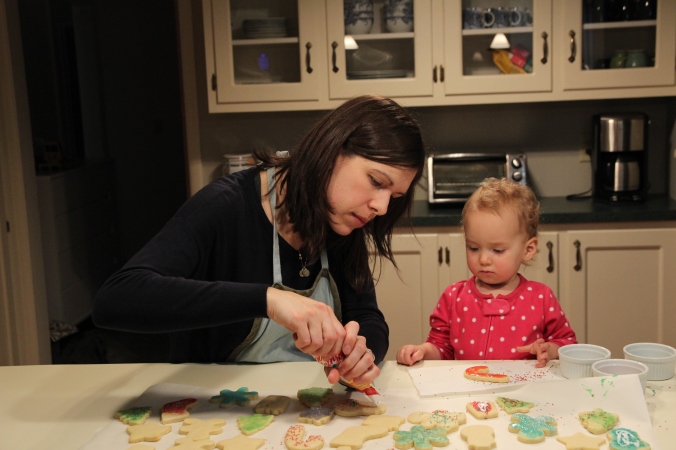 Vivi stuck with it the longest (although Jude was pretty into the sprinkling as well). She just loves art so much, I think she really took it seriously. 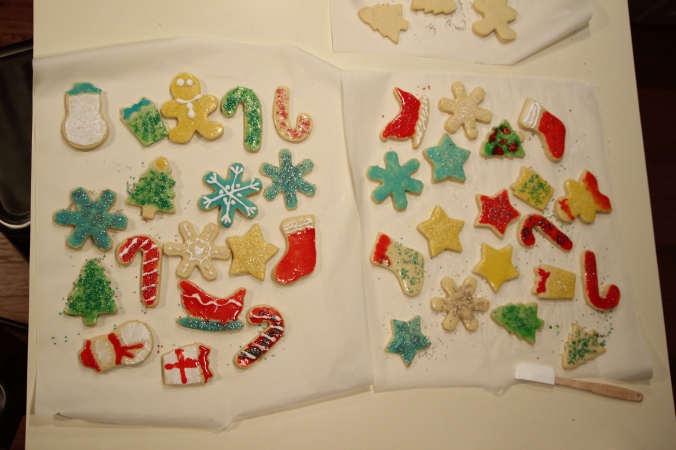 On our snow day I also took Jonah shopping for families in need. We didn’t have a very solid list of needs on this particular trip because I’d crowd sourced and come up a little confused, but we have a few organizers in mind with whom we can drop things off, so we had a loose sense of what might be useful. I’d talked to Jonah in advance about choosing gifts for families that might not have any on Christmas, and for people who didn’t have basic needs met. He was totally into it. He was SO SLOW in the toy aisle, and I kept telling him that he needed to choose his gift and reminding him that it wasn’t for him, and he kept saying “I am choosing my gift, I’m just thinking about what I want to pick.” He was super thoughtful about it and finally chose two large trucks. I picked up a doll (and am shocked and disappointed by the whiteness of the doll selection at two different stores – it was eye-opening and just reinforced my unwavering commitment to buying brown-skinned dolls from now on), some building blocks, three winter coats, and three backpacks. Jonah was really into it which made me so happy. In the clothing section he kept saying things like “We could buy underwear for people who don’t have underwear. We could buy snow pants for people who don’t have snow pants.” I felt like he was getting it, and I was thrilled.

It felt like a really long weekend full of good-quality Christmas fun. I’m excited that it’s only mid-December and that we still have two more weeks to enjoy this! Hopefully we can think of a few more fun things to throw into the mix.