We are finally, after so much waiting and hoping that it would all feel worth it, living in our new home. We moved in a week ago Monday, one day before America made one of the worst decisions in recent history and we were suffocated by rage and despair as we watched the election returns in our very own living room. It’s been a pretty heavy time for Kristin and I even though we’re so happy to be in this home, so we’ve been juggling a complicated bunch of incongruent emotions.

Surprisingly, I was actually feeling sort of anxious and sad as we prepared to leave my parents’ house. It had been SO hard moving in with them and trying to figure out how we all fit in that space, but by the end I was actually pretty content. I’d loved having my mom around to do crafts with me, the kids were happy in the space, I loved the view of the night sky from their yard and the view of downtown Kalamazoo from their balcony. My mom even said that she was going to miss us, which was a lovely surprise. The kids loved having Gigi and Papa Doc right there, and I knew that they would miss them each morning. Something about leaving felt like the end of an era that may have been somewhat unwelcome at the start, but which was an important and meaningful part of our journey back home.

Part of my fear had to do with the new sleeping arrangements. For a year now, Jonah has slept with me, or I’ve slept with him I suppose. I can’t even explain how that began exactly, because he’d been sleeping independently before that. Regardless of how we got there, that’s where things were, and Kristin was sleeping with the twins. We’d been preparing Jonah for a major change once we moved into the house, but we weren’t at all sure that it would go well. He knew that he and Jude would share a room and that Vivi would have her own room. The first night it was a challenge, but surprisingly it wasn’t a total horror show. Now that we’re a week and a half into the transition I’m pleased to say that things feel fairly good. Jude has actually struggled the most, and as of last night he’s sleeping in Vivi’s bed with her instead of in his own bed in Jonah’s room. That seems to calm him a bit more, and results in more sleep for all of us. Jonah and Vivi have been champs with the whole thing, and I couldn’t be more proud of them.

The kids really love our house – they especially love the basement because it’s 100% their space, as evidenced by the fact that it looks like this most of the time. 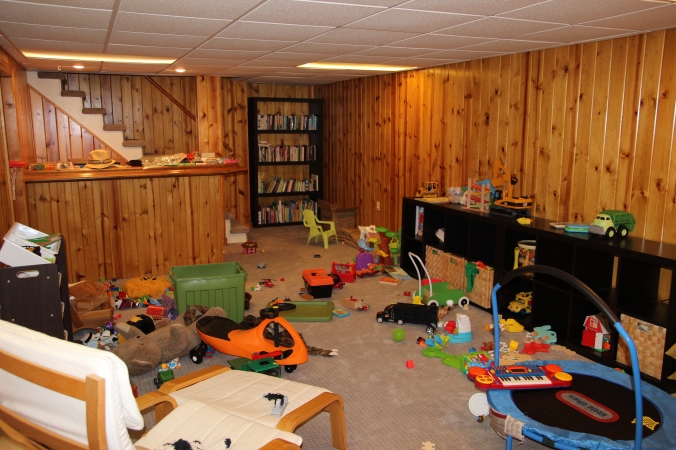 I’m actually surprised by how quickly we’ve all begun to feel at home here. It really feels like our home; there’s been virtually no period of getting used to the space (well, I suppose you could say that we had roughly three and a half months of getting used to it, but it’s all a matter of perspective). That said, it does feel like we may be unpacking boxes for the next thousand years or so. Kristin keeps reminding me that it’s only been a week and a half, and that we haven’t even had a true weekend yet because we spent last weekend on the east side of the state for K’s parents’ 40th anniversary. Sometimes though, it feels like I can spend a couple of hours sorting through crap and feel as if I’ve made no rewarding progress whatsoever. There was something lovely about having access to so little of our junk for three months. Now that we have it all back, we kind of wish it were gone again (see basement photo above).

Very little in the house is “after photo ready” so to speak, but my desire to post some photos is keeping me from giving up on the unpacking. So I don’t have a whole lot to show you right now. The half bath, however, is pretty much done and we’re really pleased with it. If you remember, it looked like this when we started: 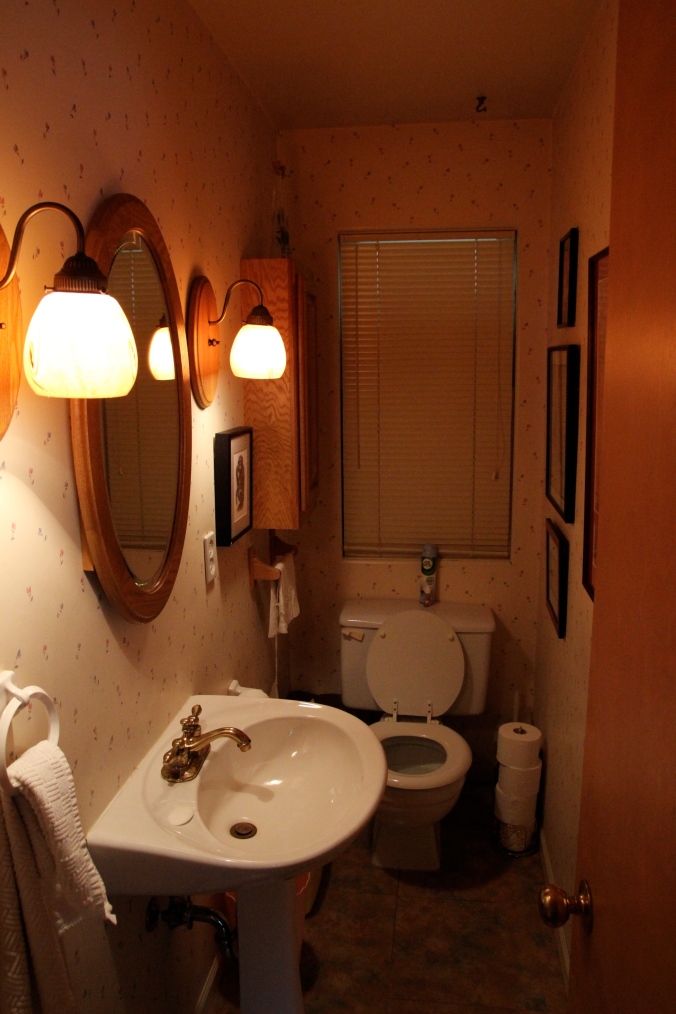 My dad pulled out the sink and toilet and replaced the hardware, we had new mosaic tile put down, I painted the walls with paint that we’d originally selected for the kitchen but never used, I painted the oak mirror with a white enamel, and we chose not to put the medicine cabinet back up. We chose new sconces and my dad put them up, and he put the toilet and sink back in for us. We took down the blinds and I applied a privacy film to the glass so that we could still have some natural light from the great room while providing a bit more privacy. Eventually we’d like to hang some sort of art in here, but for now there’s nothing on the walls. It’s so much more us and such a pleasant surprise project that we hadn’t intended on tackling. 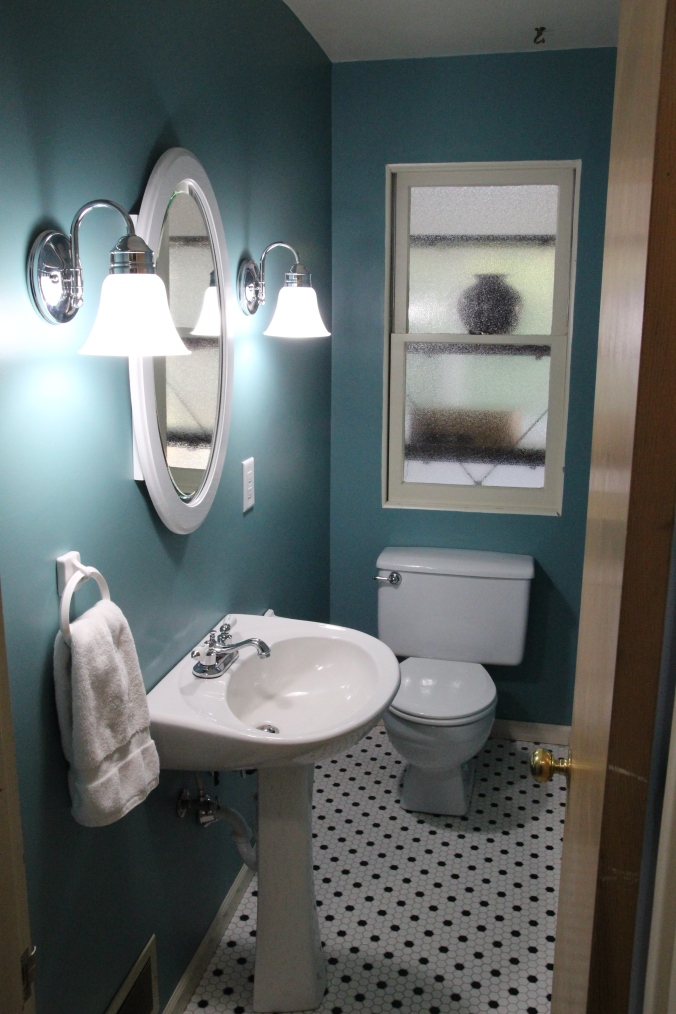 We didn’t paint the trim or the ceiling, so those are still cream, but that can wait. The bulbs in the sconces are a bit much (LEDs are no joke), so we may need to downgrade the wattage a bit so that no one is blinded when they flip on the lights. We’re so thankful for my dad’s handywork, in fact he’s put in a crazy number of hours here since we moved in. I know that we can’t call him every time we need something done, however, so I’ve been trying to follow along and learn.

We had a couple of good friends over last Friday night, which was sorely needed companionship at the end of a rough week, but also an important milestone in our journey. We have a space where we can host now! And our kitchen and great room feel so well suited to it. I’m hoping to become much better at hosting friends than I’ve ever been before. I look forward to taking more photos as things get unpacked and every corner isn’t full of boxes and paper and chaos, so I promise to do that. For now here’s a photo of the great room sans furniture, but with our lovely new floor finally complete. 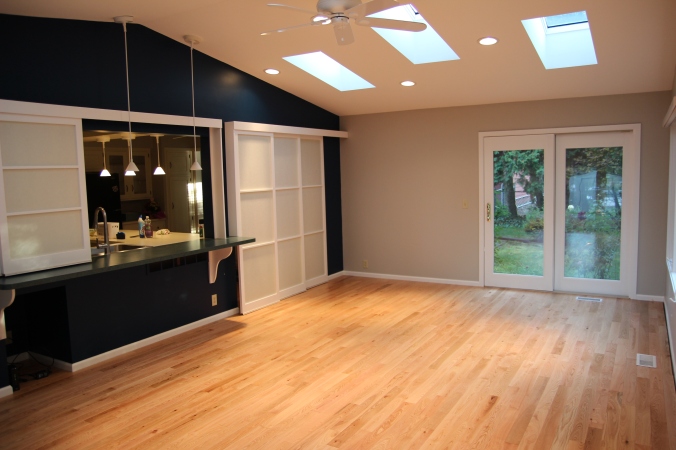