On Sunday we decided to get out and do something more fun and special, since we hadn’t done much with our Saturday. I read somewhere that there was a good children’s museum in St. Joseph, just under an hour from Kzoo, and since we miss ours so much we thought that we should check it out. When we pulled into town I was amazed that I’d never been to the beach there. We grew up always going to Lake Michigan at South Haven, never in St. Joseph, but it was gorgeous. The beach is huge and it has the biggest splash pad I’ve ever seen. 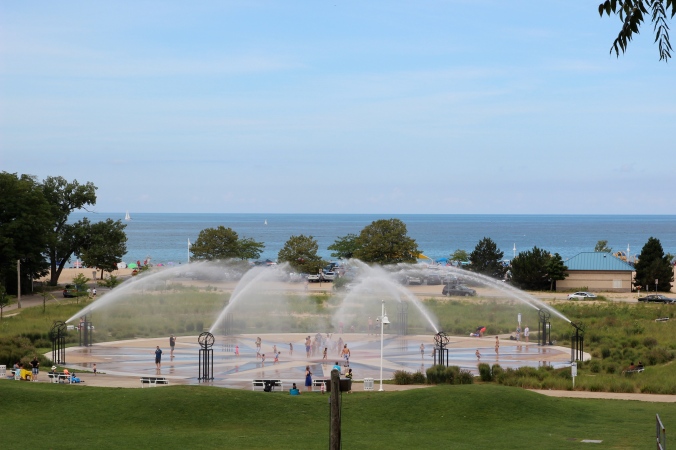 For our New York friends – yes, that’s a lake! We promise you’ll be impressed when you visit. There was even another cannon to climb on, plus bonus cannonballs. 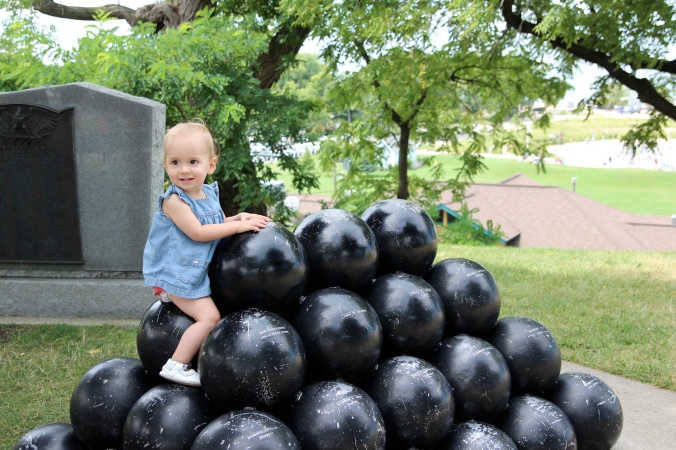 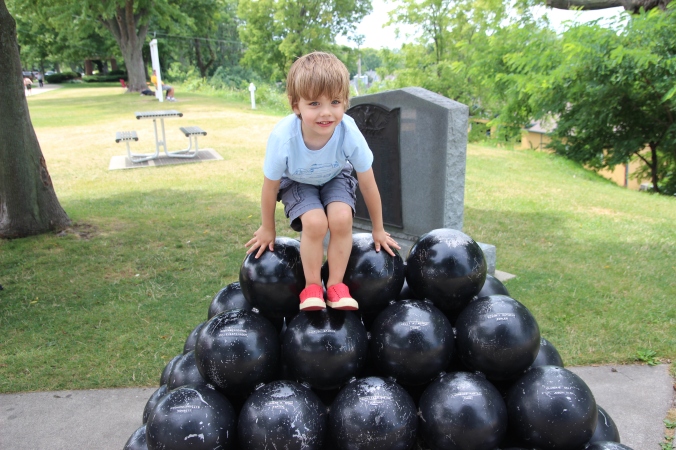 The Curious Kids Museum had highs and lows; it’s broken into two buildings, one up on the bluff and the other down closer to the beach. The one on the bluff is really better for very young children, lots of opportunities to play pretend, but less science-learning exhibits. We only got to see half of it because their power went out so we moved on, but the kids were definitely into a few things. 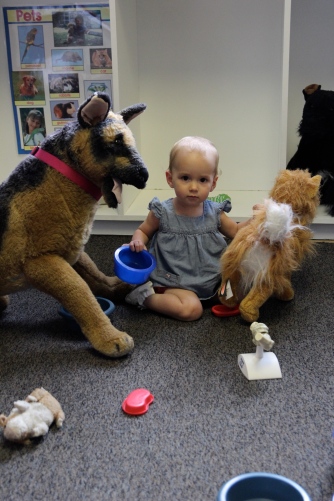 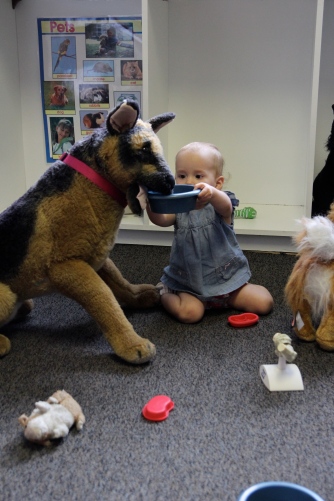 Vivi was into the veterinary office, and was lovingly feeding the dogs “agua” (she only says it in Spanish). They also had a cute little toddler farm area that all three of them enjoyed. 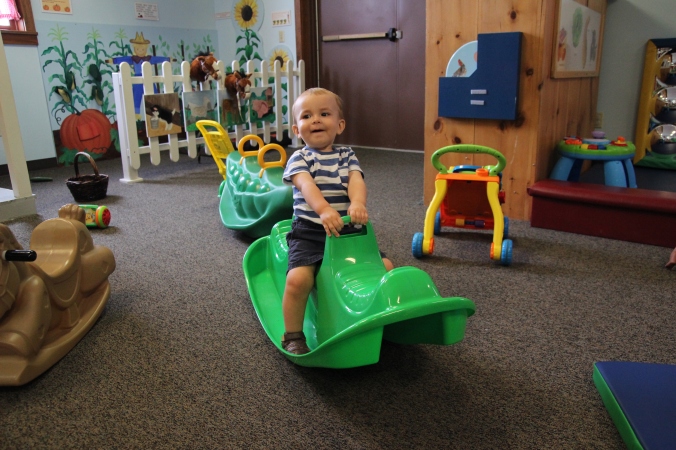 When they lost power we took a break and went to a place on the beach for pizza, but we killed time during the wait by strolling down to the playground equipment on the beach. 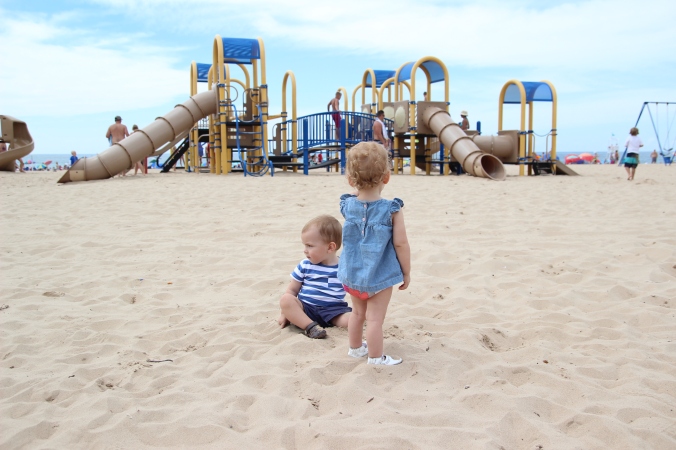 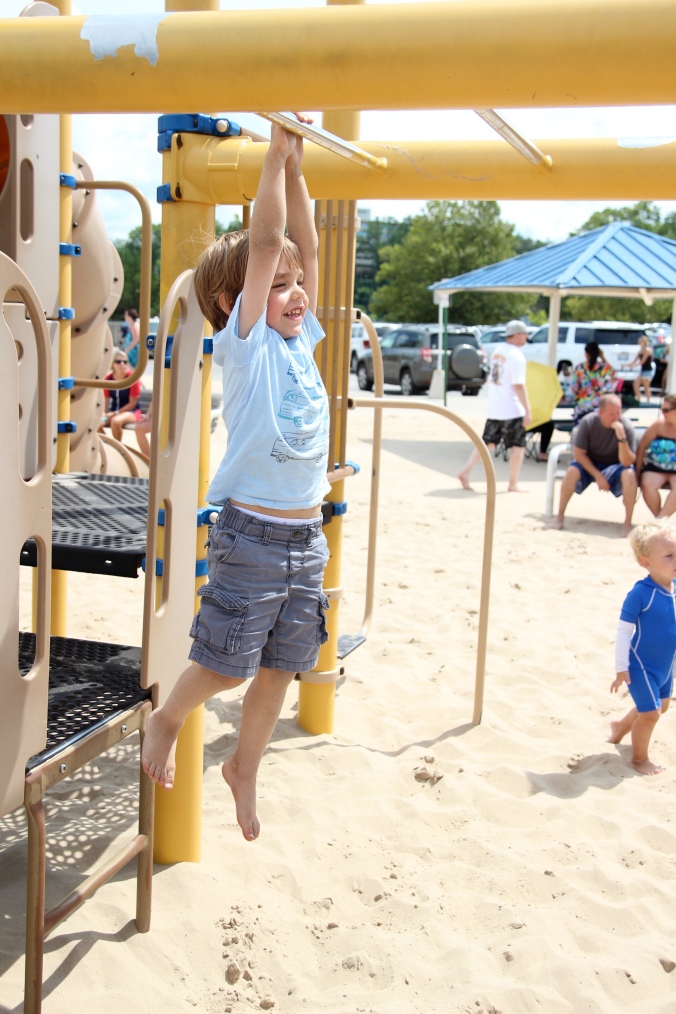 There’s a lovely carousel just next to the museum on the beach side of the bluff, and while we didn’t ride it, we did check out a cool model train that you can turn on for a quarter. 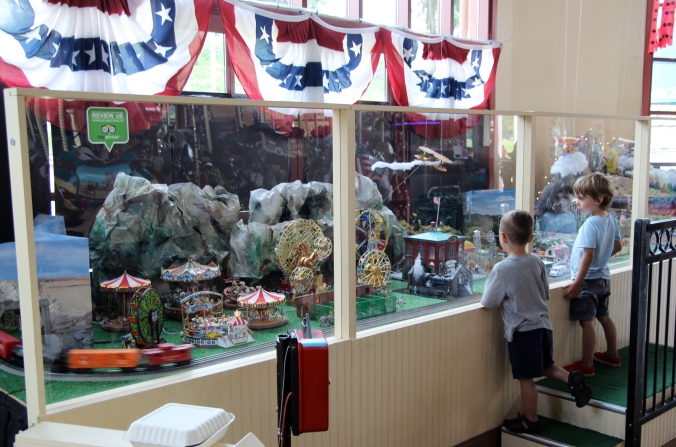 Then we headed next door for the other part of the museum, Discovery Zone. I’d heard that there was a Leonardo DaVinci exhibit, and had low expectations for it given our kids’ ages, but I was pleasantly surprised. All three kids were into the parachute tube, as well as a few other contraptions. 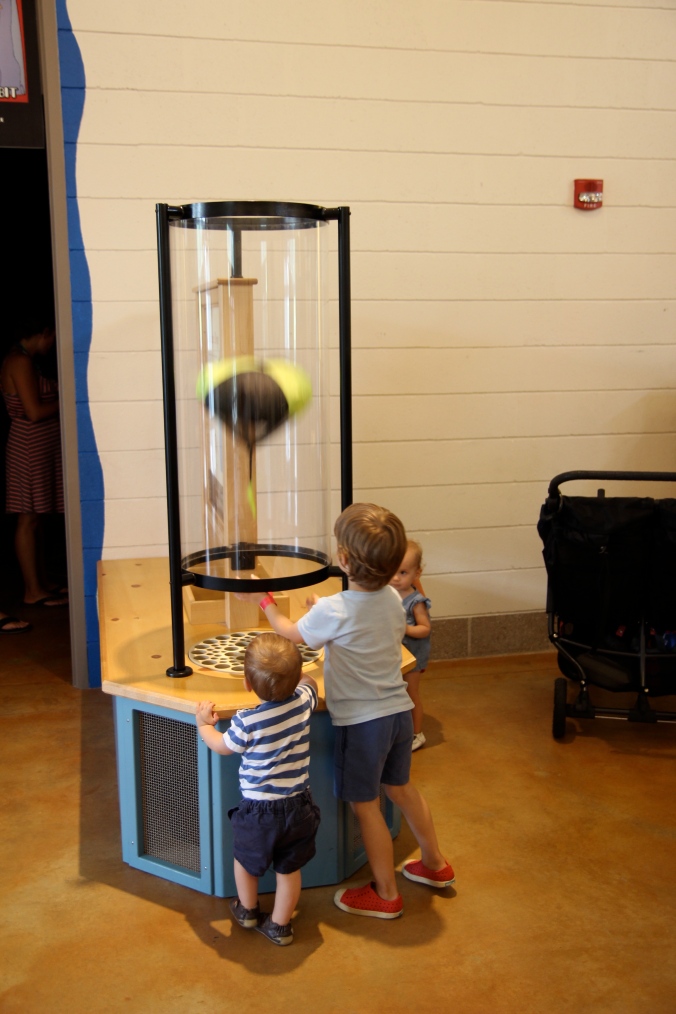 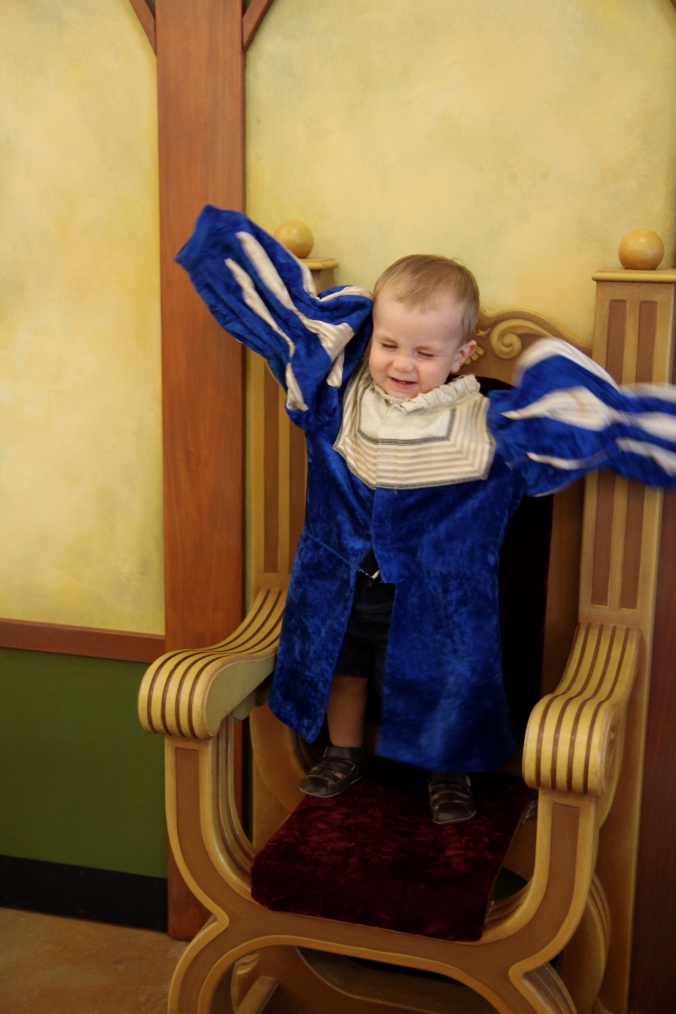 They had a nice water room, maybe not as impressive as the one at Stepping Stones, but the kids were still into it. 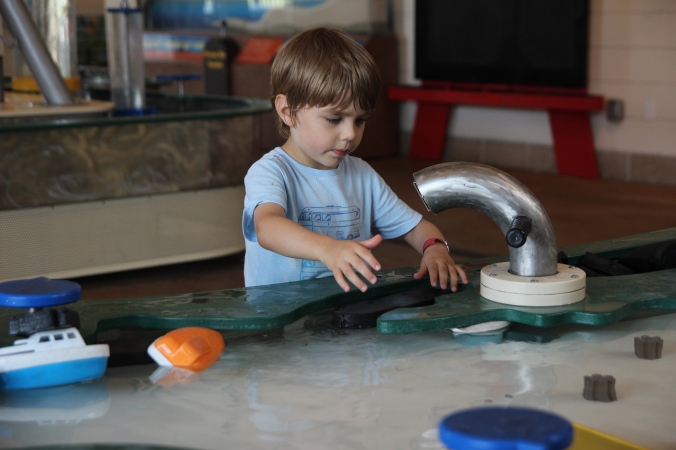 And outside they had a few random things to climb on. The sailboat was the favorite. 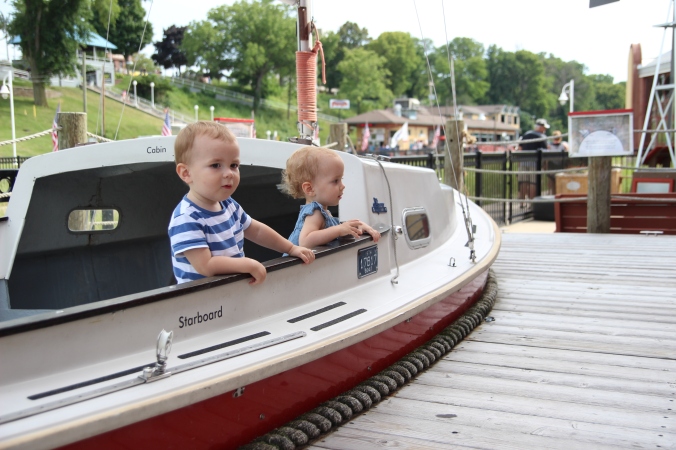 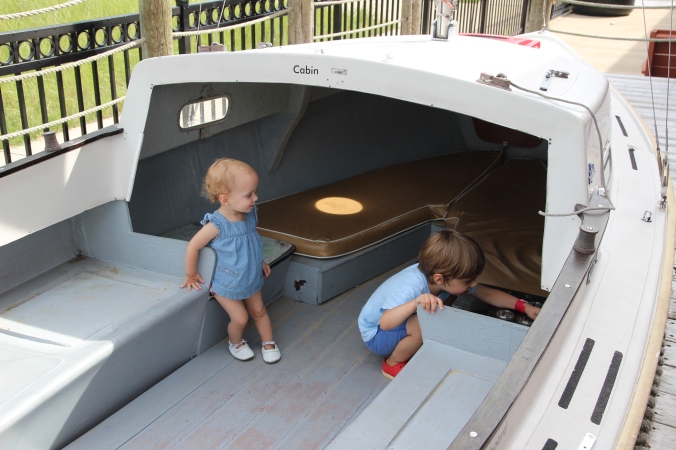 We finished off the afternoon with some ice cream, of course. Next time we’ll bring our swimsuits so that we can fully enjoy the splash pad and the beach. It felt like a bit of a mini-vacation within an hour from home, so we’ll certainly be back. 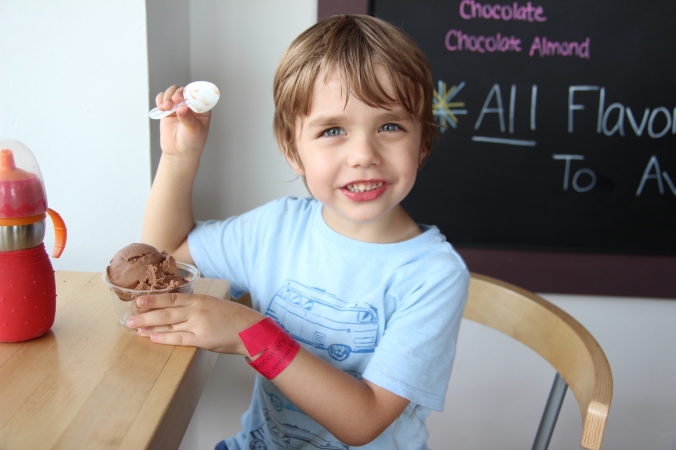