Have I mentioned that we decided to buy a house without ever setting foot in it? I don’t know whether blind date is the right metaphor, perhaps it’s more like an arranged marriage, but it certainly feels like a significant enough commitment that it’s like a marriage. My parents saw it, our realtor saw it (but only when she delivered the offer), and we saw photos and video, but we signed the contract putting a lot of faith in the unknown. I don’t know how often people do this, but everyone we told seemed to think that we were a tiny bit bonkers.

Not having seen it is probably another major contributor to our desire to get the move over with. We were dying to see our house. Roberta (the homeowner, along with her husband) sent me a text a day or so before our move to invite us to come by right away. We were so touched by her kindness and her instinct that we’d want to see it immediately. My parents asked if we were all going, but we wanted to see it on our own for the first time. In retrospect that probably wasn’t the best way to see it since we were trying to keep the kids from destroying their stuff the whole time. That said, it was still great. I’d spoken to my mom during our move drama and she said that she’d be surprised if I didn’t cry; she was right.

Jonah was a tough sell at first. We drove up and he declared that he didn’t want to see the new house and wanted to get out of the car so that he could walk back the way we came. We weren’t sure what to do without my parents there to help, but somehow I got him into the front yard, and Roberta won him over and got him inside.

We went into this knowing that the house needed a lot of cosmetic work. The colors are not our taste, the flooring is different in almost every room, but we felt that the layout (what we could imagine, at least) would work well for us. It’s not a huge house: three bedrooms, 1.5 baths, under 2,000 square feet, but it checked so many boxes for us and honestly, that’s probably the biggest house that I can take care of given my lack of housekeeping ability.

I just love the neighborhood. There are SO many trees! The front yard is huge and has these cute little concrete benches out by the huge maple tree. Walking in the front door there isn’t much of a foyer (which we knew) but what’s there has a pretty slate floor and a good-sized coat closet. You walk right into the formal living room (which we’re still figuring out how to use). Right now it has lavender walls and cream colored carpeting. 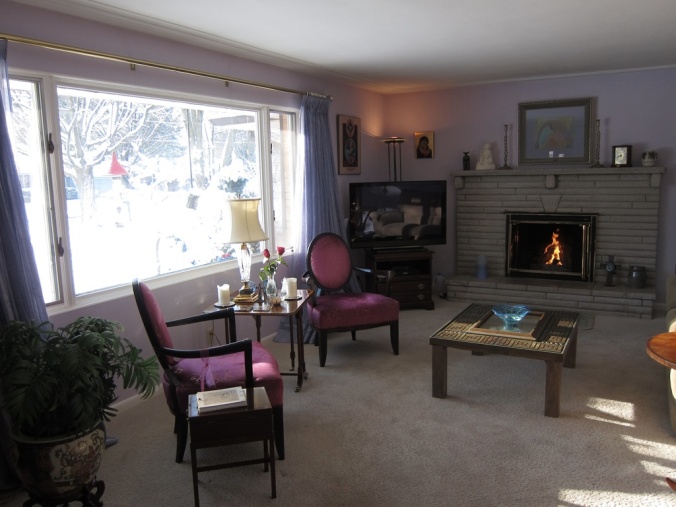 It’s a good size, so I’d love to figure out a way to make it truly useable space. We’ll see. From the living room you walk into the kitchen, which connects to the great room. When I walked into this kitchen it felt so surreal, because I honestly felt like I was standing in a photograph. We’ve just looked at the photos so many damn times. 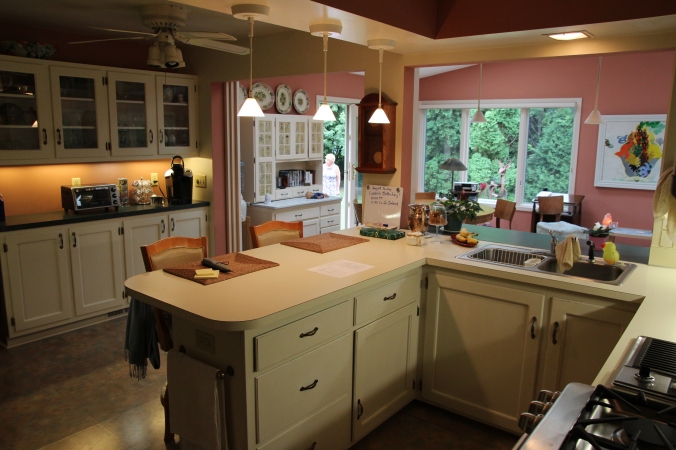 The actual cooking space isn’t huge, and it’s not a recently updated kitchen by any means, but the fact that it opens to the great room and that it has that whole left hand side with additional storage makes it far superior to all of the kitchens we’ve had in New York. Eventually we’ll replace the countertops (some are cream and some are dark green) and I’d love to paint the cabinets, but that probably isn’t happening before we move in.

The great room is amazingly bright and airy. It’s the room that I suspect we’ll use as our everything room, hence the question mark on how to use the living room. There are six skylights (I think? – now I can’t remember), sliding doors to the backyard on both ends, and windows along the other wall. It’s a tad smaller than I expected it to feel, but that may have had to do with the odd furnishing and the paint color. 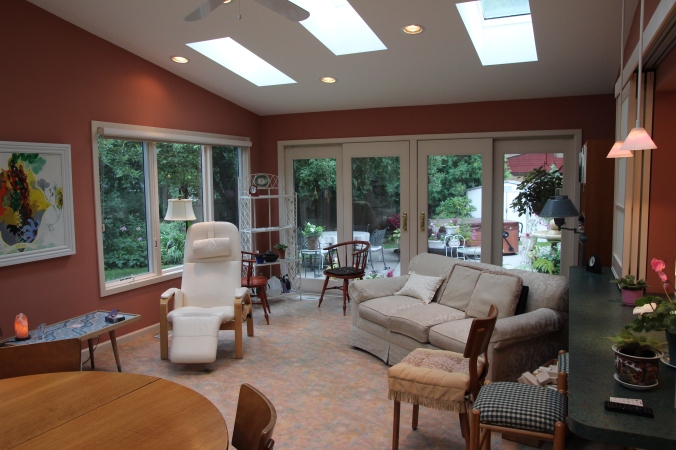 Clearly we have some painting to do (or to hire out, if we’re being honest). The flooring also has to go. (I only took one of those pictures, by the way, which is why the time of day and the furniture don’t match).

The bedrooms are small, which we knew going in. That was one of our big compromises. For some reason, Vivi’s room (the smallest, at 10 x 9) felt exactly the way I expected it to feel, and didn’t concern me at all. I felt the same way about our room, which is 14 x 11; enough room to make it work. The boys’ room, however, gave me pause. It felt really small in person. Smaller than I expected. I honestly wondered how we were going to get two beds in there, but Roberta claims they’ve done it before, so we’ll see. It’s 10 x 11, with a door on one side, a closet on another, and windows on the other two walls, so you don’t have a lot of unobstructed wall space to work with. It’s also painted a dark mauve, so maybe that’s contributing to my perception of the size.

The bathroom needs a crazy amount of work – a total gut renovation if you will, but that’s not going to happen for awhile. It has the original 1954 pink and green tile, with a pink sink, pink tub, and pink toilet. For some reason, the homeowners have no fewer than five paint colors in there – every corner changes to a new sherbet-toned color. We’ll paint it, but the rest will have to wait till we can afford to change it.

Those cabinets are pink, in case you can’t tell. At least it has a ton of counter space and storage underneath. I sort of love that.

The backyard is lovely. We have a big patio (which I didn’t take any photos of, for some reason) with an apple tree that will provide shade for a table and chairs perfectly. There’s plenty of yard for the kids to play, but not so much that the yard work will be out of control. Jonah immediately found the spot where he wants his treehouse/swingset and squatted down to show us. 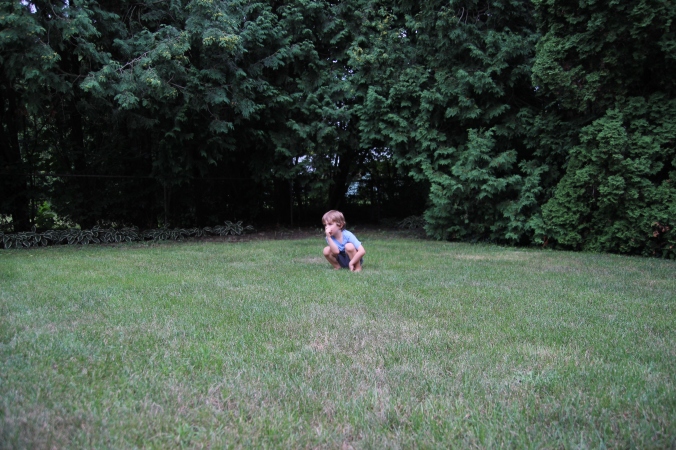 Fortunately that’s the corner that my dad had in mind anyway.

The basement is partially finished, partially storage space and laundry room, but even the storage area is bright and spotless and wonderful and it’s huge. I am ridiculously excited about being able to store things in the basement. Christmas decorations? Out of season and outgrown kid clothes? So long expensive storage unit across town. I’m also thrilled to have a garage for bikes and other outdoor kid toys. And our own laundry? Amazing. When you’ve lived in an apartment in New York for thirteen years, your bar is pretty low. All of these conveniences that are probably boring to others seem completely remarkable to us.

The finished part of the basement has 1950s knotty pine paneling, a knotty pine bar, and pink shag carpeting. Eventually we’ll re-carpet, but we honestly don’t mind the paneling. It has character.

When Jonah walked into the basement he asked, “Is this where we’re going to play?” Eventually yes, this is where we think all of the toys will live. Maybe not until we can trust the twins to navigate the stairs on their own, but it won’t be long.

There’s also a large (10 x 18) breezeway from the garage that connects to both the kitchen and great room, and we plan to turn it into a mudroom eventually. I’ve always wanted a mudroom. This picture is dark and terrible, but you get the idea.

The half bath is your typical outdated half bath, unremarkable except that it has a window into the great room (since the great room was an addition, and that window used to go to the outside). It will need to be renovated, but it’s going to have to wait.

Overall, our impressions of the house were really positive. Kristin said that it was perfect, and I think she really meant that. It was probably 95% what I expected, with very few surprises. I’m someone who really wants things complete; leaving things halfway done gives me anxiety. Walking through the house as a naive first-time homebuyer was a bit of a reality check about how much simply isn’t going to be done when we move in, and I have to figure out how to deal with that and not get all twitchy about it. We weren’t shopping for a fixer upper (and we’re not terribly handy), but this house just felt right to us. We plan to have it painted and to put in new flooring throughout most of it (with the exception of things like the bathrooms, basement, and mudroom that we plan to do later on), but now I wish that we could paint the kitchen cabinets immediately, which makes me want to do the countertops immediately, and those things just aren’t in the budget. We also realized that we need to paint the trim in at least the great room if not a few of the other rooms (we’d planned to leave the trim for budget reasons), because it isn’t cream, it’s pale pink. So there was more of a sense of “oh, there’s a lot to do here” than I’d expected to feel, but I’m also aware that this is surely just a new homebuyer thing. I need to admit that most houses need some things (or at least some cosmetic changes to fit the style of the new buyers), the projects are rarely “complete” and I have to figure out how to live with that.

Kristin has spent about a billion hours on Pinterest over the past couple of months, so we’ve had about a million conversations about design and colors and what not. Kristin discovered this handy piece about choosing a whole house color palette, so we’ve been referencing that as we go. We picked out a sofa and then abandoned the original idea because the colors weren’t right, and we’ve been choosing and re-choosing paint colors for ages.  We’re sorta thinking that we’ll end up along these lines, but things could change quite a bit.

We want to put in hardwood floors in some sort of a warm, light tone, but we have no idea what that will be. We’re excited to check out some flooring places now that we’re here. Jonah is excited to plan out his swingset/treehouse with Papa Doc (and honestly I think that Papa Doc is just as excited). Last night he said that it needed four swings, three ladders, three sets of stairs, a fireman’s pole, a slide, and a trap door. It’s a tall order no matter how you slice it.

As we drove to the house, Kristin said to Jonah that since he’s always called our apartment “the red house” (because the exterior wall on our balcony was brick), she wondered what he would call the new house. He stubbornly refused to consider the possibility that it could have a name, since he didn’t even want to see it. When I laid down with him at bedtime, however, he announced to me (unprompted) that the new house would be called “the brown house.” That moment was worth so much. 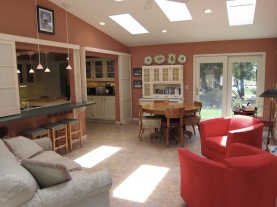 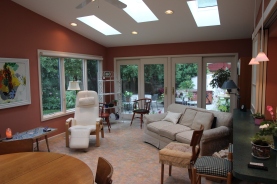 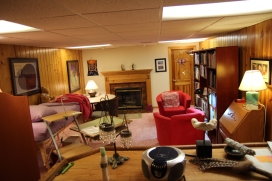 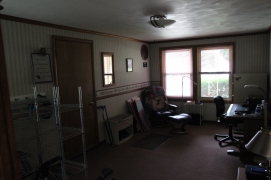