First, can I just say that I really love our house? When I think back to the agony of our long-distance house-hunt, I vaguely remember thinking that it would be amazing to have a mudroom, even just a tiny hallway that could serve as one, but I don’t think that I ever believed that it was likely enough to make it to our formal “wish list.” We were incredibly lucky to find this place, and one of the rooms that has held a lot of promise but mostly felt like a disappointment for the last two years is what the previous owners called the breezeway (despite the fact that it’s a fully indoor, four-seasons room). It’s a remarkably large breezeway, at 10′ x 18′, and I believe the previous owners used it as an office. It connects the garage to the rest of the house, with doors to both the great room and the kitchen. 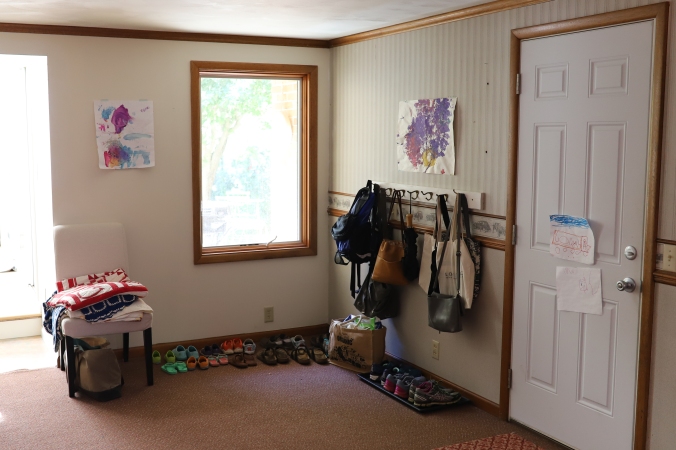 We’ve always intended to use it as a mudroom, but because it was the one room of the house that we did absolutely nothing with when we moved in, and because nothing about the room was our style, it became the default junk room. Everyone just dropped their stuff there (which I realize is kind of the point of a mudroom) but with no organizational system to put anything away, and any other bulky junk with no other home just ended up living there. It was awful, and we couldn’t wait to fix it up and shift it to a multi-use room. The renovation was finally on our agenda this summer and while it took until the end of October to complete, it was well worth the wait. My dad was the hero of this entire project. He pulled up the indoor-outdoor carpeting and laid the vinyl tile (the description at that link makes me laugh), he cut and installed all new quarter-round trim, he (and my mom and I) spent an entire day installing IKEA Pax wardrobes along one wall (including some impromptu electrical work to ensure that the outlet behind the wardrobe was still useable), and he built three pieces of furniture. He also made roughly a million trips to Lowe’s. I did a marginal amount of power sanding, stained a single bench top, and applied many coats of oil to the butcher block table. Oh, and I hired a paint and wallpaper professional because we’d be in this through December if we’d been responsible for doing that.

The finished product is even more wonderful than we’d imagined. We finally have a real, functional mudroom. 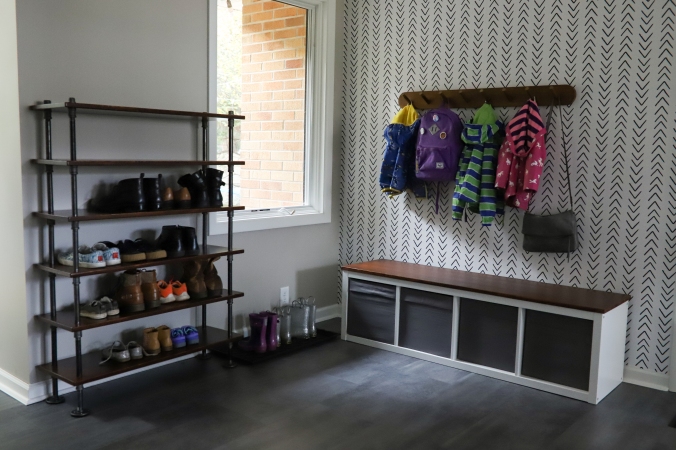 We searched forever for a bench with storage that we loved and never found one, so we ultimately bought an IKEA Kallax bench and put a wood top on it because we liked the look better and wanted some additional warmth in a mostly grey/black/white room. Each kid has a bin for his or her stuff, and Kristin and I share one. The hook rack is from West Elm.

My dad built the shoe rack after we found a similar one on Etsy. He spent a ton of time deciding how to go about this and making it happen. I can’t even begin to explain how transformative this shoe rack has been. This entire corner of the room was typically just an ocean of shoes scattered from wall-to-wall. The kids actually come in the door and put their shoes right on the rack! Kristin bought me these prints a few months ago and I love seeing them as we enter the house. 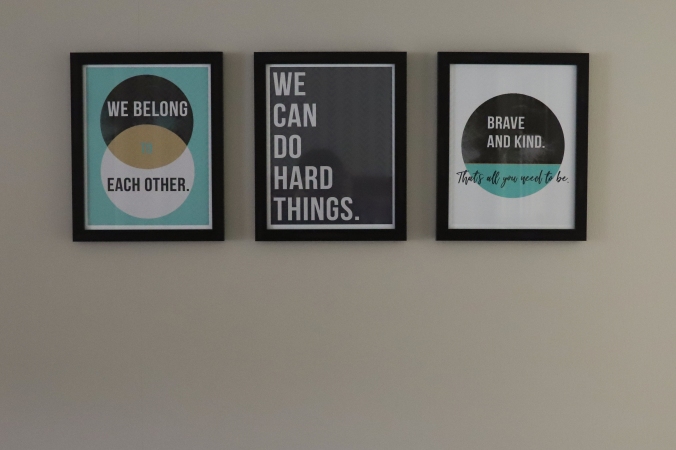 And the other half of the room? The half that used to have pink blinds and a bounce-house sitting in the corner? It’s now my craft room/office and I love it so very much. 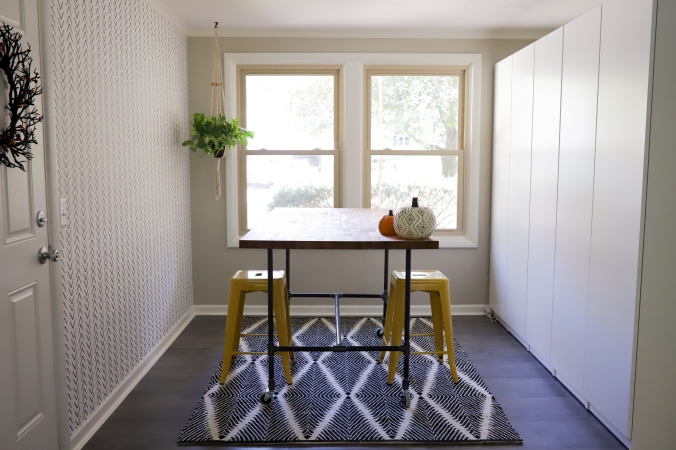 That photo actually doesn’t show scale very well, but the table is a 6′ x 3′ butcher block that we bought unfinished and sanded and oiled, and the legs are gas pipe (just like the shoe rack) but on casters to make it easier to move around, given its weight. The assembly on that one was actually shockingly quick, and while I wouldn’t call it inexpensive (roughly $180 for the butcher block and probably another $175 in gas pipe) it’s probably cheaper at its size than something we could have bought ready-made.

The IKEA Pax wardrobe cabinetry stores everything that was previously stored in a desk (which we sold) as well as all of the arts and crafts supplies that never had a good home (paints, construction paper, a million coloring books, crayons by the billions, my sewing machine, knitting stuff…). The additional storage is unbelievable. And while this photo doesn’t illustrate it, we now use the cabinet doors to display the kids’ artwork which brings some really wonderful color and fun into the space.

The stools are from Target but you can get them anywhere (and the table actually seats six comfortably if you pull it away from the wall and put stools at both ends). The rug is from Lulu & Georgia.

And the wallpaper, which I adore, is from Livette’s. Oh, and the light fixture which you can’t see in any of these photos because I don’t have a wide angle lens, is from Schoolhouse Electric, and we love the way the black stripe works with the wallpaper. So I climbed up on a stool to get a photo for you. The grey paint is Benjamin Moore Revere Pewter, which is the same as in all of the other open areas of our house, so the room finally feels like it makes sense with the house.

So that’s it! We love it and maybe some element of it will inspire you too. I spent many hours working on Halloween costumes at my new craft table, and I can’t wait to dive into my next project there, whatever it may be.