Nothing too profound today (although I’ve been doing a lot more thinking about kids and gender norms lately, so there may be a part 2 to this post coming up soon). I just want to log a little bit of summer weekend family fun.

We kicked things off on Friday evening by heading to a movie in a nearby park. Our first experience with an outdoor movie (actually, I think it may have been our first experience taking any of the kids to any movie ever) was this one last summer. Jonah asked if this one was going to be shown on a barn, a sensible conclusion for a four-year-old, but it actually took place at a park we’d never been to that was less than a mile from our house. We arrived at about 7:45, having stopped for candy and brought some popcorn from home, and got settled on our blanket. There was a playground nearby so we spent some time there, and by about 9:00 I was starting to get very grouchy and impatient. I know that Michigan is on the other end of the time zone from New York, but somehow I expected the parks department to have a projector that’s capable of operating in some daylight. But then the fireflies came out, and the kids all ran towards them. 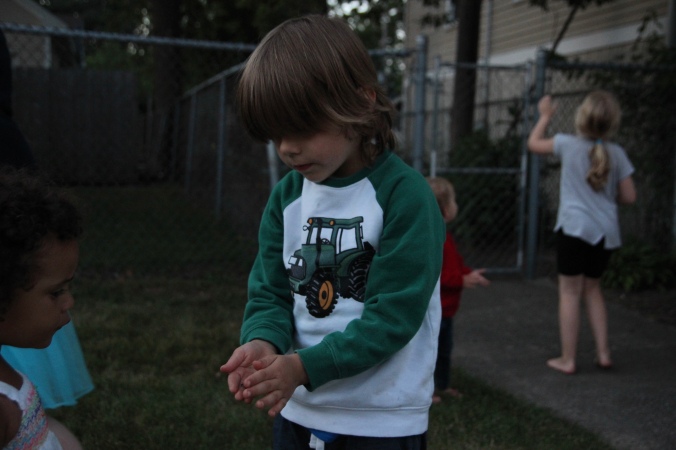 At first I caught and handed them fireflies, but before long they’d all caught their very own first fireflies (confession: I actually grew up calling them lightning bugs, but fireflies sounded better in the blog title, so now I go back and forth). They were all SO proud and Jude and Jonah even ran over to Kristin on the blanket to show her. 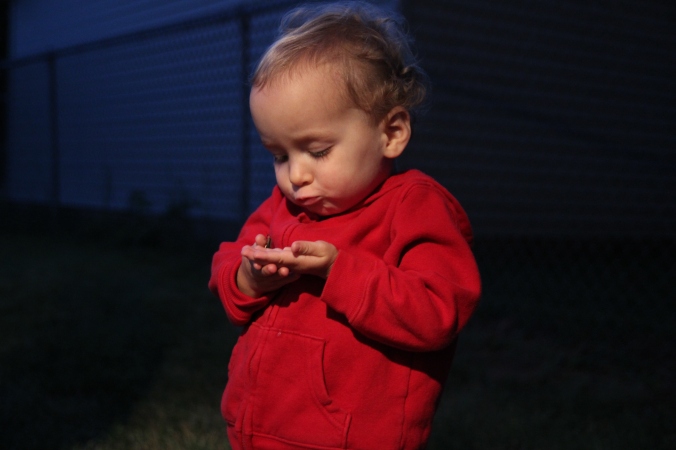 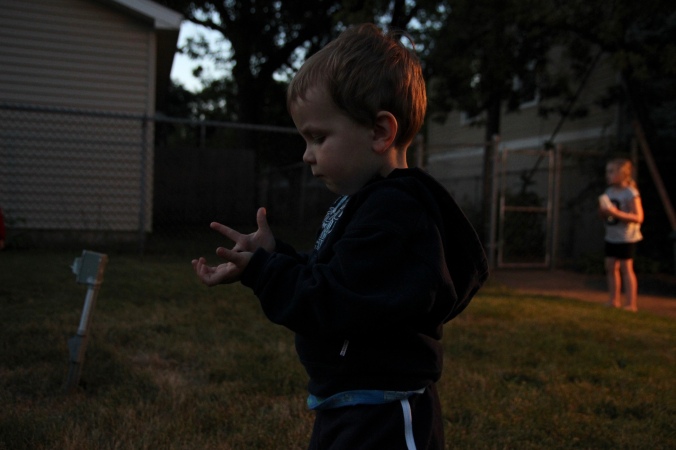 I think that I may have seen Jude and Vivi give theirs kisses. Everything about it was adorable. And just to add to the sweetness, there was an older boy there (maybe a few years older than Jonah) who caught them just to hand them to the little kids repeatedly. It was darling.

Then the movie started and by some magic, everyone stayed awake and no one got cranky! Jude and Vivi were fast asleep at the movie last summer, and despite this one ending at nearly midnight they made it all the way through.

On Saturday we’d decided that we would check out the Binder Park Zoo. I hadn’t been in decades, and we had low expectations. We know that we were spoiled by the Bronx Zoo, and a friend warned us that Binder Park really ought to be called, “Trails, With Animals” because mostly it’s just a boatload of walking with periodic animal exhibits. It was more or less what I expected, but the kids had fun. 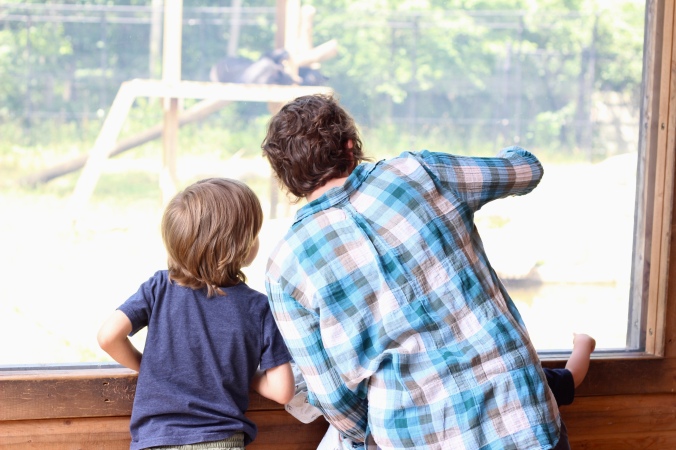 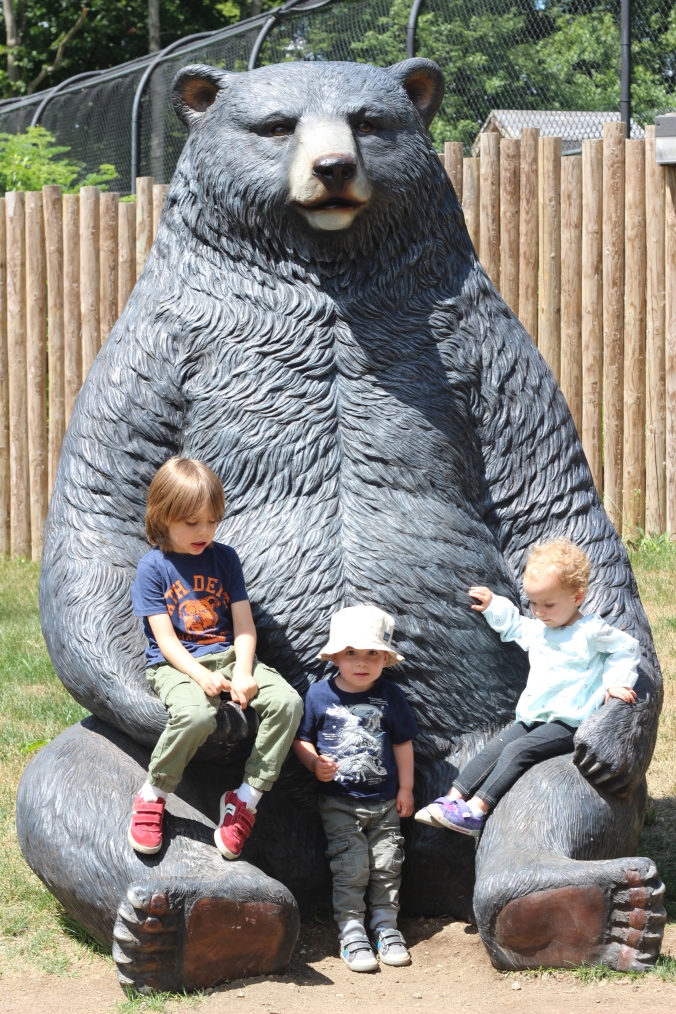 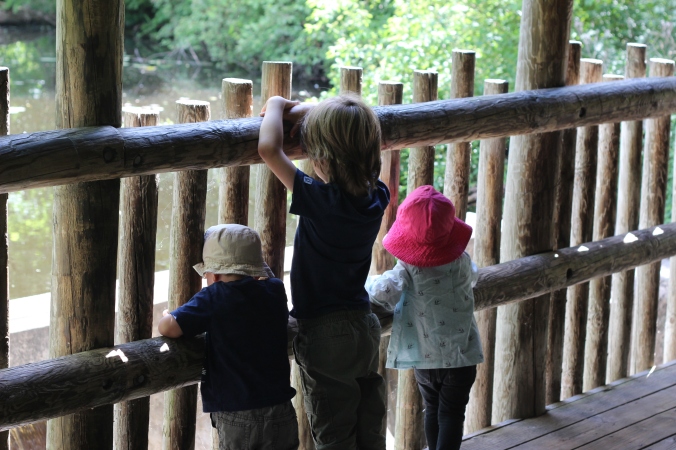 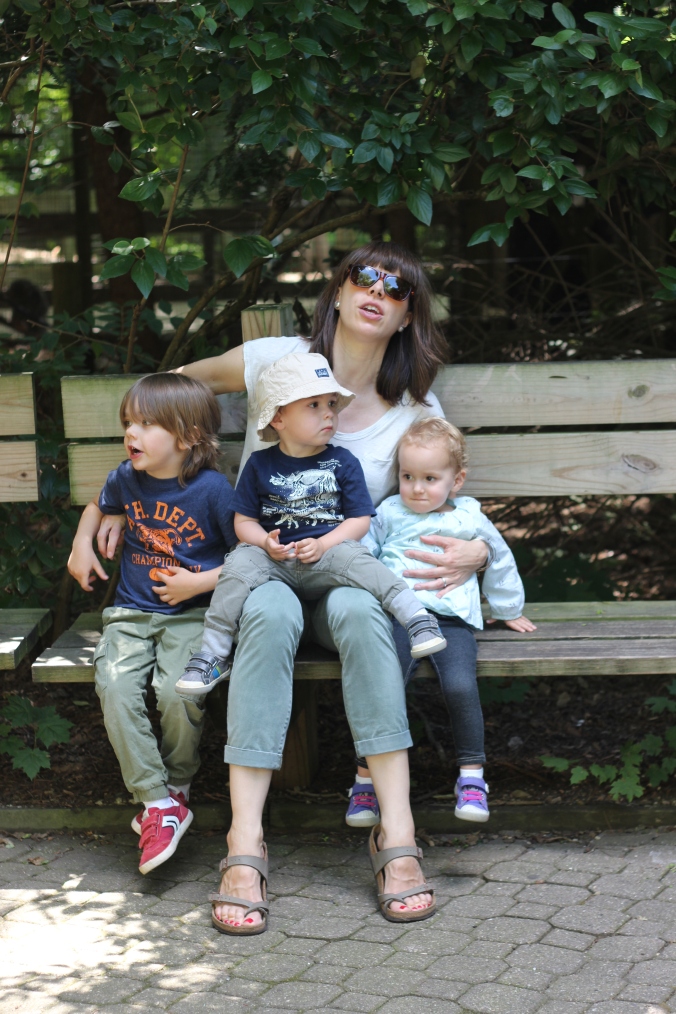 See that photo above. That’s what happens when you really want to be in a picture with the kids for once, but two out of three are trying to get away and would rather be doing anything else but that. Thanks guys.

More than anything else, the kids were into the train ride and everything that was climbable. We asked Vivi later that evening what her favorite animal had been and she said, “the choo choo train”. 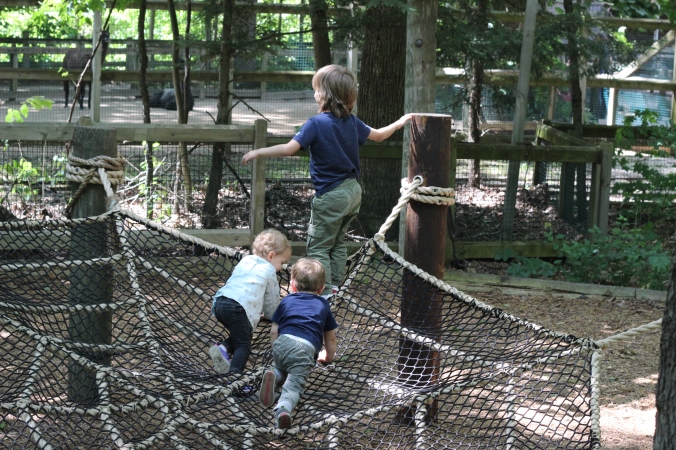 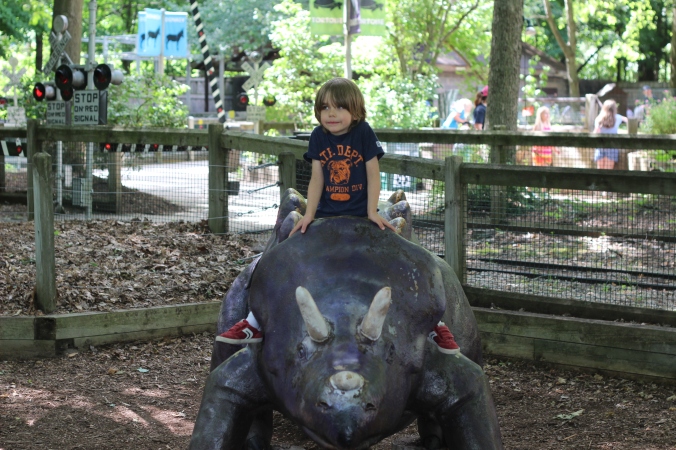 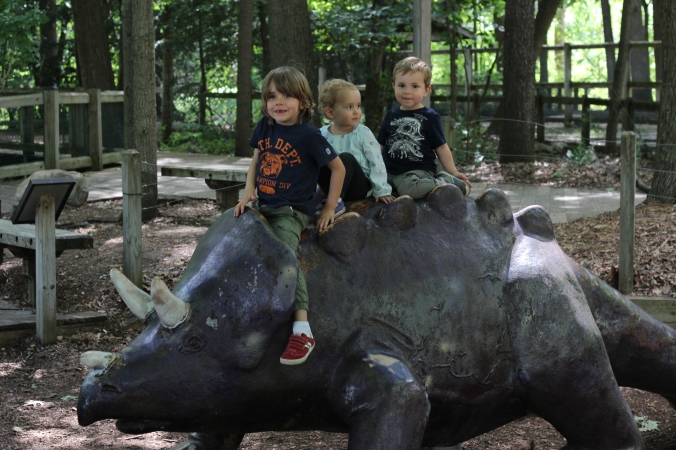 They all seemed to enjoy the children’s zoo, and Vivi really loved the goats until she got nibbled. 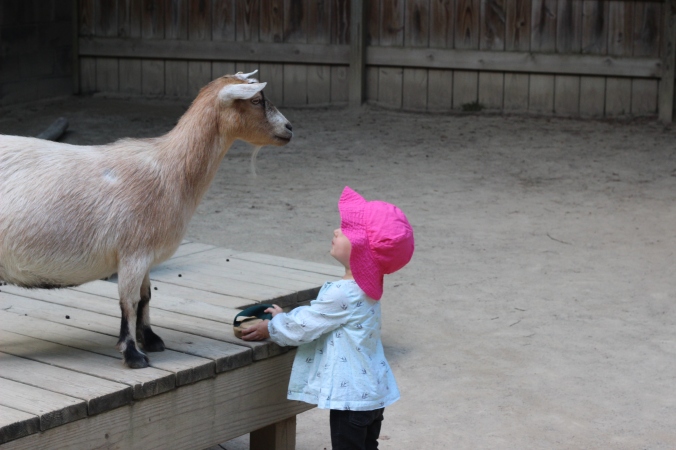 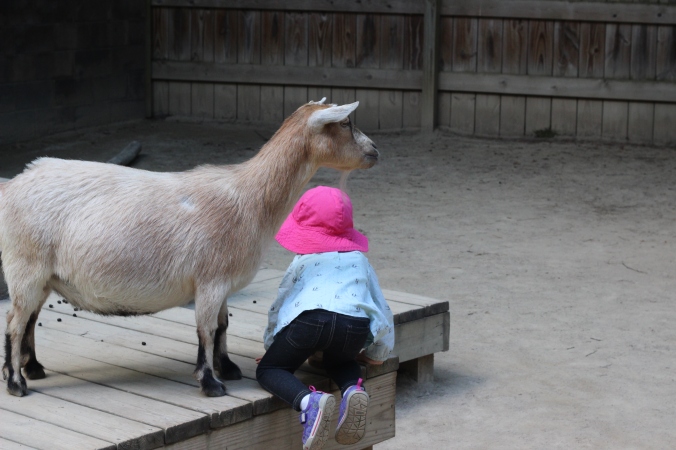 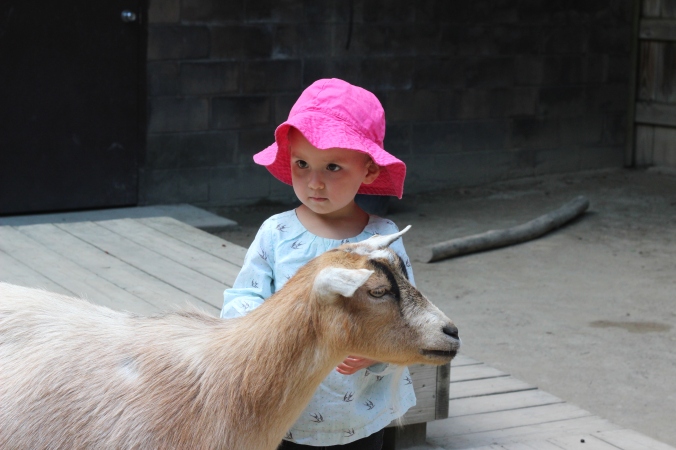 On Sunday we mostly hung out at home because the kids’ exhaustion seemed to have finally caught up with them (midnight bedtime Friday and nothing but car naps on Saturday? I can’t imagine why) and they were crabby, but when I came home from a grocery run with Jonah, Kristin and the twins were in the front yard with the gator and shortly thereafter the neighbors across the street invited us over the blow bubbles. It was a lovely way to end the weekend. 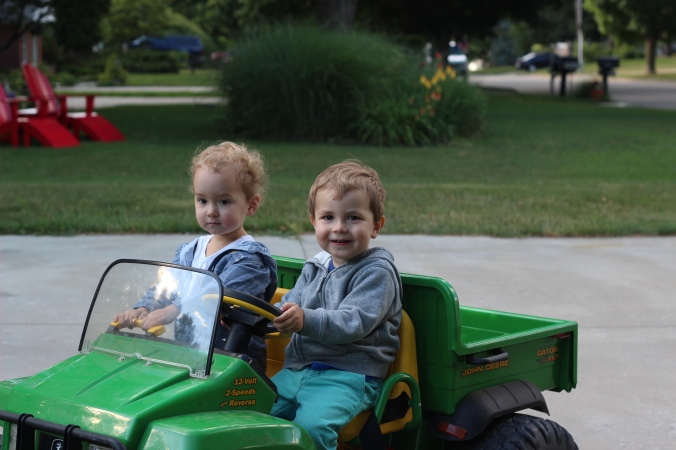 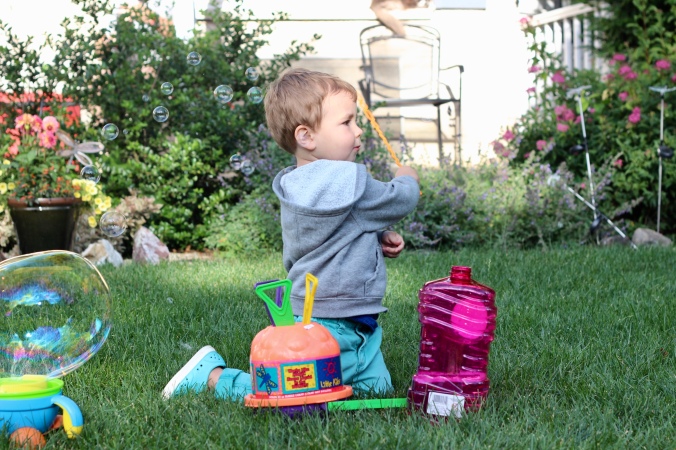 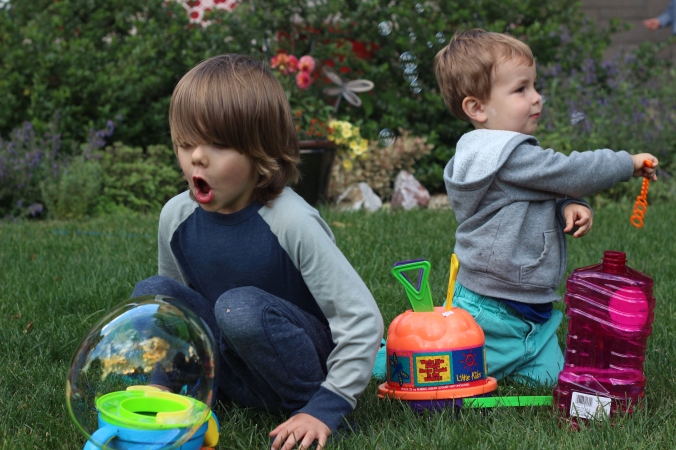 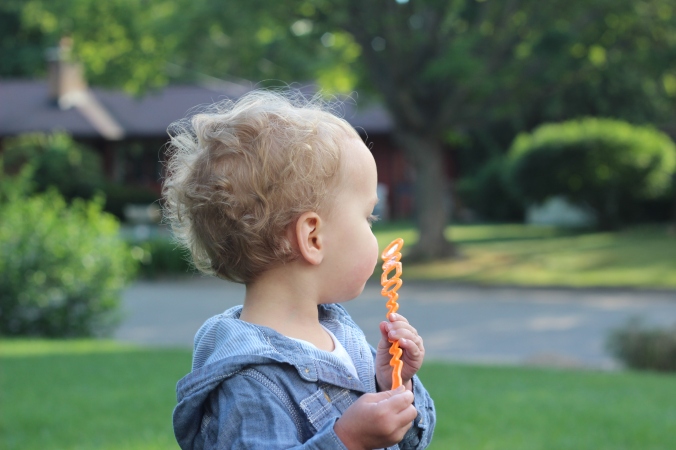